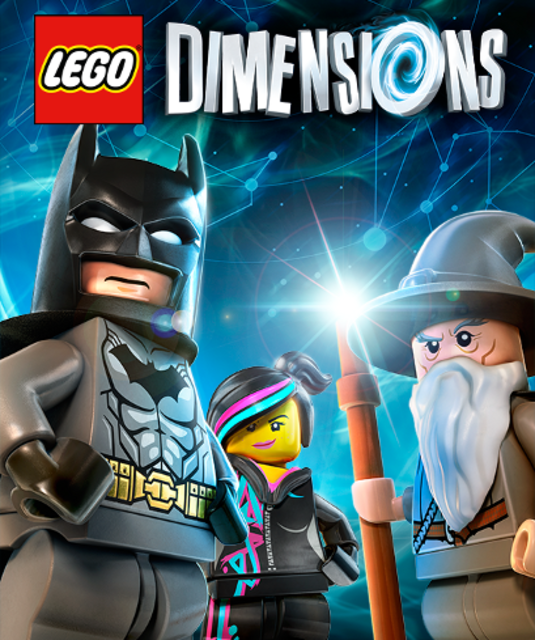 The LEGO toy brand's first foray into the burgeoning "toys-to-life" genre of video games, Dimensions brings together various pop-culture series together in an epic minifigure mash-up.
Xbox 360 PlayStation 3 Wii U Xbox One PlayStation 4

LEGO Dimensions is a toys-to-life action-adventure game developed by TT and published by WB for the Xbox One, PlayStation 4, Wii U, Xbox 360, and PlayStation 3 on September 27, 2015.

Playing similar to TT's other games based on LEGO toys, Dimensions combines various LEGO themes (including Ninjago and Legends of Chima) with pop-culture franchises owned by Time Warner (including the DC Universe, various films, and Cartoon Network cartoons) and guest characters (such as Chell from the Portal series and Sonic the Hedgehog). Similar to the Skylanders and Disney Infinity series, the game utilizes a special "toy pad" peripheral that allows players to swap between characters and other content (including new ones sold as booster packs) using near-field communication found in the bases of special toys (which are basically buildable LEGO minifigures and models).

The main antagonist of the story is the mysterious Lord Vortech, whose goal is to become ruler of the LEGO Multiverse by controlling the twelve Foundation Elements and merging all LEGO Universes together. It's up to three of the greatest heroes of numerous LEGO universes (Batman from the DC Universe, Gandalf from The Lord of the Rings, and Wyldstyle from The LEGO Movie) to recruit help from other universes and stop Vortech's plans.

In October, 2017 it was reported TT Games would stop working on Lego Dimensions and would not be extending their work into Year 3.

Vehicles can be altered in real life to change their appearance and abilities in game also. For instance the DeLorean from Back To The Future can change from Time Machine to Electric Time Machine to its final form Ultra Time Machine.

LEGO Dimensions has a base game which comes with Batman, Wydestyle, Gandalf and The Batmobile. It is possible to complete the main game with the base game but some access to certain parts of the game are only accessible by purchasing more packs (for example Bart Simpson or Golem can crawl in small tunnels).

There are four types of packs purchasable for LEGO Dimensions. These are Story Packs, Level Packs, Team Packs and Fun Packs.

In addition to the three types of packs there is also Story Packs, these are not released regularly and add to the main story, also they allow you to "rebuild" the base to whatever the theme of the pack is.

Developers have stated that LEGO Dimensions has a three year plan meaning that players will not need to purchase another base to play newer content.

Each franchise has it's own Adventure World in LEGO Dimensions and each year more brands are added to expand the content of the game.

Released May 10, 2016. This wave was the last of year one and the only wave to consist of only Fun Packs.