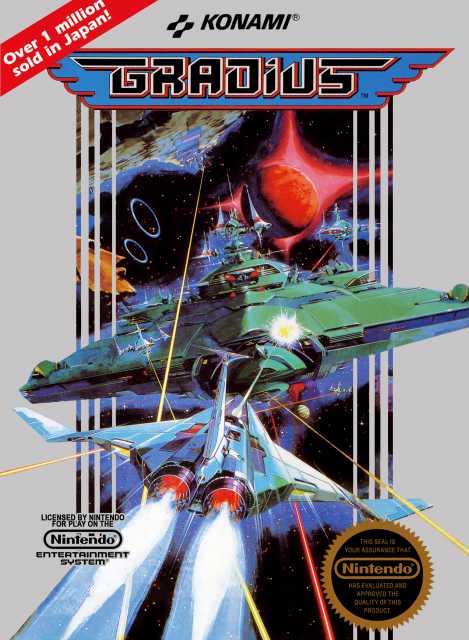 A side scrolling arcade shoot 'em up and the first in Konami's famous series. The game became famous for its extreme difficulty and varied power-ups.

Gradius (known in the arcade release outside of Japan, as well as some home releases, as Nemesis) is a sci-fi side-scrolling shoot-'em-up developed and released by Konami for arcades in 1985.

A spiritual successor to the studio's earlier 1981 game Scramble (and originally planned as a sequel to it), Gradius puts players in control of the starfighter Vic Viper as they navigate through fantastical, yet hostile, areas in the star cluster Bacterian while defeating alien ships and upgrading their ship using power-ups. The name refers to the planet Gradius, which is being under attack by Bacterian forces commanded by the super space fortress Xaerous.

The game is known for its unique Power Meter, which allows players to choose which upgrades they want for their ship based on how many Power Capsules they collect. Along with numerous sequels and spin-offs, the game received multiple home ports, as well as inclusions in multiple compilations.

The game was first ported to the Nintendo Entertainment System in 1986-1988 (April 1986 in Japan, December 1986 in North America, and November 1988 in Europe). This version features some minor differences, and is best known for being the first game to implement the Konami Code. This version was also released in arcades by Nintendo in North America as VS. Gradius, using their NES-based VS. System hardware.

The game was also ported to the PC Engine exclusively in Japan on November 15, 1991. Like the NES version, this version received multiple digital re-releases as part of Nintendo's Virtual Console series, all exclusively in Japan, for the Wii (in August 2007), Nintendo 3DS (on December 2013), and Wii U (on April 2014).

The game was also included in the Turbografx-16 Mini / PC Engine Mini mini-console on March 2020, making it the first time this version was available outside of Japan. It also features an unlockable bonus version, called "Gradius near Arcade", which attempts to bring the port closer to the original arcade version.

The X68000 version was unique as it was included in the first model of the system, as a way to demonstrate the system's performance.

The MSX version was the only one to receive a digital re-release, exclusively in Japan. Like the NES and PC Engine versions, it was released for the Wii U as part of Nintendo's Virtual Console series (on September 2015).

The original arcade version was included in multiple compilations and digital re-releases:

The original arcade version of Gradius has three buttons: Shoot (which fires the main weapon), Missile (which, when the Missile power-up is active, fires a missile downwards), and Power-Up (which, if the Power Meter highlights a valid option, empties the meter and grants the chosen power-up to the player). In most home versions of the game, the Shoot and Missile buttons are combined into one.

Players start each life with minimal speed and a basic cannon shot, and can upgrade their ship by collecting Power Capsules to progress through their six-part Power Meter. Each Capsule progresses through the highlighted parts of the Meter, which determines which power-up players get once they hit the Power-Up button (after which it empties). Collecting a Cell while the meter is maxed brings it back to the first highlighted part (Speed-Up).

These power-ups are, in Power Meter order: