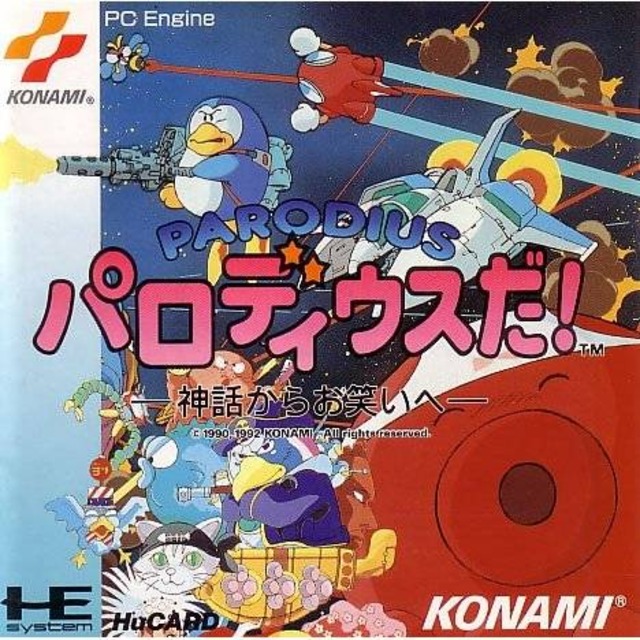 The arcade sequel to the original MSX Parodius, Parodius Da builds on its Gradius-style gameplay and its unique comical charm.

Parodius Da! Shinwa kara Owarai e (loosely translated to "It's Parodius! From Myth to Comedy", known in European versions as Parodius) is a comedic side-scrolling shoot-'em-up developed and released by Konami for arcades exclusively in Japan on April 25, 1990.

The sequel to the original 1988 game Parodius, Parodius Da is the first arcade release and builds on both the Gradius-style gameplay (with each character having their own Power Meter, similar to Gradius II: GOFER no Yazou) and the series' comical elements (with new enemies and environments).

The game received ports to multiple consoles of the era in Japan (including the Famicom, Game Boy, Sharp X68000, PC Engine, and Super Famicom). The NES, Game Boy, and SNES versions were also released in Europe. It was also bundled with its sequel in a compilation for both the PlayStation and Saturn (as Gokujou Parodius Da! Deluxe Pack, known in Europe simply as Parodius). It was also included in the Japanese PSP compilation Parodius Portable.

Similar to Gradius II, the game four different Power Meters to choose from, each with some unique weaponry. In this game, each Power Meter is tied directly to a different playable character.

As with the previous game, the Power Meter is split into seven sections:

The Roulette Capsule pick-up returns from the original Parodius, which turns the Power Meter into a roulette wheel that gives a random power-up once the Power-Up button is pressed (or after some time has passed in Auto mode).

Returning from the original Parodius game (and prominent in the TwinBee series) are bells that are dropped by certain enemies. They can be shot at to "juggle" them forward and change their color, and can be collected to give one of multiple power-ups:

From the Gradius series, the Vic Viper is a standard starfighter. Uses the traditional Power Meter (with the classic Missile, Double, Laser, and Shield power-ups).

The series' main protagonist, Octopus is a flying octopus. His Power Meter closely resembles the fourth Power Meter in Gradius II, as well as the Power Meter from Life Force.

From Antarctic Adventure, Pentarou is a flying penguin.