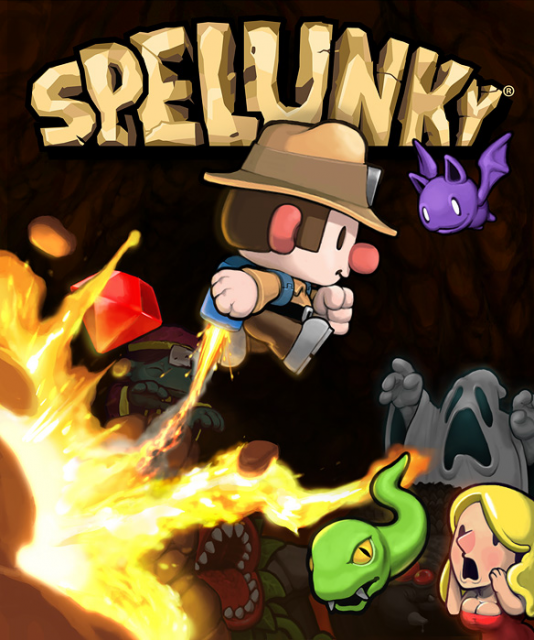 Players play as an adventurer who, starting with a whip, some rope, and a few bombs, explores a series of dangerous procedurally-generated caves. Players explore the caves while amassing a fortune in treasure, acquiring better equipment, defeating relentless monsters, avoiding unforgiving traps, and saving damsels in distress along the way. However, the game features permadeath, in which death results in restarting the adventure from the very beginning.

The updated version of the game (known as "Spelunky HD" to differentiate it from the original) was released for PC via Steam and Gog.com on August 8, 2013.

As a 2D platformer, the core abilities of the player include: attack, stomp, run, jump, ledge grab, and climb. The player may fall a significant distance before taking damage, which can be avoided by careful ledge grabs or equipment use. Ledges two blocks high can be grabbed normally, and equipment can greatly improve the player's traversal. Knockback physics are a significant aspect of taking damage, throwing items, and using bombs to affect the environment or attack. Air control in mid-jump includes the ability to start running, allowing for very precise and practiced maneuvers.

Items and monetary rewards such as gold and jewels are scattered through every level, out in the open or inside containers. These containers range from breakable jars, to locked chests, to the very ground itself. Rewards are converted to specific amounts of money which serves as the player's final accumulated score. Equipment can also be discovered in the world, or purchased from shops.

One or more "damsels" can be rescued throughout the levels. They exist stationary until picked up, at which point they will begin walking if put down or thrown. They will not jump out of pits and will not pass through webs. Damsels have hit points just like the player, and can act as a limited damage sponge while being carried or thrown to trigger traps.

In the HD version; the sprites used for damsels can be swapped between a woman, a man, a dog (which can optionality be swapped out for a sloth) or one of the three randomly. All damsels rescued reward the player (at the level complete screen) with a kiss that restores one heart each.

In addition to rescuing damsels, players can choose to use them as sacrifice them at altars to gain favor with Kali. This will net the player useful items that can used as they descend further and further.

The player can purchase various goods from stores that can exist on the map. There are gun shops, bomb shops, general stores, gambling rooms, and even a sort of brothel complete with a spinning red light. It is possible simply to purchase a gun and then shoot the shopkeeper, resulting in free items and some dropped money. This carries grave consequences, as the player will become "wanted" and will no longer be welcome in stores. Entering any store after shoplifting will result in the shopkeeper becoming immediately hostile and trigger a shopkeeper standing near the exit to every level until the player dies or escapes the caves. This makes the game much more difficult, as one has to either scavenge for health and supplies or risk their life to rob another store. Any damage caused to a store will similarly make the shopkeeper angry. This includes boulders from picking up an idol, and any stray bombs. If a shopkeeper ever drops his shotgun by taking damage, he is entirely capable of picking up other weapons from his inventory! An angry NPC with a rapid fire energy weapon is a fast track to death.

Certain types of equipment are always active once obtained. These appear in their icon form underneath the life, bomb, and rope counters. Others work like carried items and can be picked up or left behind at will.

The adventure levels are procedurally generated, resulting in a unique experience every playthrough. Each world also has random events or "feelings" that may trigger when a level is generated.

The caves are the first tileset in Spelunky. Scattered with minimal gold, spiders, scorpions, bats, snakes, and the occasional caveman, this is the easiest location. Random events include:

The jungle is a considerable step up from the Caves. Littered with frogs, exploding frogs, spike idols, piranhas, man eating plants, and "Jaws", this is the second state of play. Random events include:

The Ice Caves are considerably easier than the previous floors, with subtle differences. The Ice Caves have little traction, meaning the player can slip and slide all over, and there is no enclosed floor, meaning the player can plummet to their deaths in The Abyss. In addition to the aforementioned perils, there are also Yetis, Alien spaceships, and a boss Psychic Alien.

The Ancient Ruins are the final standard levels in Spelunky. Featuring Lava pits, crush traps, earlier traps, Worshipers of Olmec, amongst many other environmental hazards, this is a test of any true Spelunker's mettle.

Hell is the true final world accessible through the secret second exit of Level 4-4 after fighting Olmec. The exit can only be accessed with the Book of the Dead, located in the City of Gold. Hell features horned Devils, Vampires, and Succubi who pose as damsels. Spike traps, lava pits and swinging spike balls are also plentiful. The final boss, King Yama, awaits in his throne room on level 5-4.

At the end of each world players will come across Tunnel Man, a miner who asks for items in exchange for building a shortcut that allows players to start at a given level. He will ask for items in a certain order, and players are only allowed to give him one set of items in each encounter. The requirements for each tunnel are as follows.

The haunted castle can be found on any level where a text displays "The dead are restless." It's a level filled with undead and the legendary Black Knight, who wields a unique shield.

It's possible to gain access to the worm level in levels featuring a sticky red dot. When jumping on there while also holding a damsel, a gigantic worm will appear and swallow the player. In the level, players are making their way through said worm's innards.

The Black Market can be found through a secret entrance in the Jungle. The Udjat eye can be used to pinpoint it's exact location. It's a place filled with numerous shops and it's possible to get the ankh there.

A level that can be found in the Ice Caves, when a text displays "It feels like the fourth of July..." It's an alien mothership, guarded by the alien queen, who can be killed for the very powerful plasma cannon.

The City of Gold

The legendary City of Gold can be found in the temple after killing Anubis. It's a city that is literally made of gold. It contains the book of the dead, which can be used to eventually reach Hell.

On February 20th, 2013 two pieces of downloadable content were released for Spelunky on Xbox 360. One piece of DLC included 24 new maps for use in the Spelunky's deathmatch mode while the other provided an additional 8 characters for use in the game. Both pieces of DLC are priced at 160 Microsoft Points. Developer Derek Yu stated on the Mossmouth forums that paid Spelunky DLC would be relegated to fun extras and that any additional content to the single player game such as new levels would be provided free of charge via an Xbox Live title update.

The later PC, PS3 and Vita releases of Spelunky included all the DLC content.

Spelunky began as a freeware 2D rogue like platformer (now known as Spelunky Classic) developed and released by Derek Yu for the PC on September 1, 2009.

Soon after releasing the game, Derek Yu founded a small independent developer named Mossmouth with Andy Hull, which then developed an updated version of Spelunky for the Xbox 360 (via Xbox 360 Games Store). It was published by Microsoft on July 4th, 2012 for 1200 MSP (USD$15). Along with redone high-definition graphics and advanced graphical effects, the update includes local multiplayer (in both the traditional "adventure" mode and a new competitive "deathmatch" mode, which is a series of "last man standing" bouts in similar vein to the Bomberman series) for up to four simultaneous players and/or bots, a brand new soundtrack, online leaderboards, and 20 achievements (worth 400 Gamerscore).