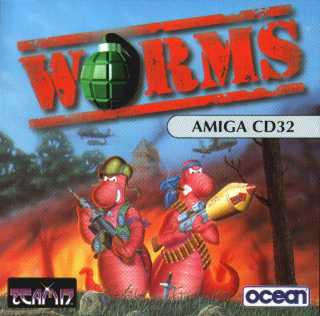 The brainchild of Andy Davidson, Worms is a 1995 turn-based tactical artillery game where up to four teams of worms square off against one another using an wide assortment of weaponry.

Originally created by Andy Davidson for the Amiga, and later ported to a variety of other systems by Team17, Worms is the first iteration of the long-running Worms series of turn-based strategic artillery games. As in subsequent games, the goal of Worms is to use a team of well-armed annelids to kill worms of opposing human or A.I. players; in each round, the last player with living worms is declared the winner. Worms was first published by Ocean Software Ltd. in 1995, and in addition to its original platform, it has appeared on the Amiga CD32, PC, Game Boy, Genesis, Jaguar, Macintosh, PlayStation, Saturn, and SNES; in fact, it has been ported to more systems than any other Worms game. A version of the title was even considered for Nintendo's Virtual Boy at one point, though Team17 co-founder Martyn Brown stated in 2008 that the Virtual Boy port never truly made it into the development stages due to a sentiment that the platform was "doomed to failure".

The DOS version of Worms was followed up by Worms: Reinforcements, an expansion to the original game, in late 1995; the following year Worms and Reinforcements would be released as a single package under the name Worms United. Worms would later be released on Steam in 2011 and GOG.com in 2012, though in both cases the version sold is Worms United, not the original game. After completing Worms Davidson would also head up the development of Worms: The Director's Cut, released in 1997, which was an Amiga-exclusive version of Worms that featured a large number of new weapons and game options not previously seen in other iterations of the game, many of which were adopted in Worms 2, released the same year. Both 2006's Worms: Open Warfare and 2007's Worms are considered remakes of the original Worms due in large part to similarities in their weapon loadouts.

Worms was originally conceived not as a commercial product, but as a distraction for creator Andy Davidson, a fan of local multiplayer games like Bomberman and Super Mario Kart, and his high school friends. It was initially built using borrowed assets from Psygnosis' Lemmings, and the earliest version of Worms was known as Lemartillery as a result. The game eventually became so popular among the students of Davidson's school that it was banned entirely, prompting Davidson to consider the possibility of having his game published. In order to make the game more attractive to would-be publishers, however, the game's graphics had to be reworked, and thus Davidson scrapped the original lemmings on favor of worms, giving this new iteration the name Total Wormage. Davidson was so intent on getting his game published that after high school he decided to forgo the pursuit of higher education in order to do so. While he continued to work on the game, Davidson used the customers of an Amiga store where he worked as a form of playtesting for Total Wormage.

In one of his efforts to get his game noticed, Davidson submitted Total Wormage into a competition held by Amiga Format, a British Amiga magazine. By Davidson's own admission, though, his entry into the contest did not accomplish what he had hoped, as he neither won nor received any mention in the magazine. Although discouraged by this and a number of failed attempts at garnering attention for Total Wormage by mailing copies to publishers and developers, Davidson had one final idea: to take the game to the European Computer Trade Show in London. This would prove to be the turning point in Davidson's fortunes, as while there he demoed the game to Team17, who showed an immediate interest in it. Team17 offered to help Davidson develop and publish the game; much of their work went into porting Worms to other game systems, as the original Amiga version that Davidson had been working on was by this time fairly well-developed. In total, Davidson estimates that he spent about four years of his life in the development of Worms.

Gameplay in Worms consists of actions taken by between two and four teams of human- or A.I.-controlled worms on a two-dimensional playing field. The game is turn-based, with each player being able to move a single worm per turn; turns typically end once a worm has either fired a weapon or sustained damage, although they can also end automatically if the allotted time for a turn runs out. From there, play shifts to the next player in the sequence, which is determined randomly at the beginning of gameplay, and that player proceeds in the same fashion. The objective of worms at all times is to cause as much damage to enemy worms as possible while also preserving one's own worms. Each worms starts the round with a certain amount of hit points (typically one hundred), and if their hit points are reduced to zero, they will die, leaving behind a gravestone and creating a small explosion that can harm nearby worms. Worms can also be killed instantaneously by being knocked outside the boundaries of the level or into liquid substances that reside at the bottom of the stage. If a player loses all four of their worms, they are eliminated, and the winner of a given round is the player that survives the match without being eliminated.

Each player starts the match with an assortment of armaments and utilities in order to aid them in their goal of dominating their opposition. This includes staple weapons such as bazookas and grenades, which can be used frequently, to more powerful weaponry such as homing missiles and dynamite that can only be used a finite number of times. Worms also contains a handful of "super weapons" such as banana bombs and explosive sheep, which can only be obtained through periodic weapon crate drops during a match; these items are extremely potent, though incredibly rare to find. Some weapons require that the player be able to accurately gauge the proper weapon trajectory and launch power necessary to hit a target, which can be further complicated by the inclusion of wind conditions that can affect certain projectiles while in flight. In addition to weapons, Worms also offers a number of movement utilities designed more for defense or traversal than offense; this includes items like ninja ropes and teleporters, which allow different ways of moving around the environment, and items like blow torches and pneumatic drills that can carve through obstructions.

Environments in Worms are completely destructible, and almost all weapons cause some amount of deformation to the terrain. Over time, this reduces the size of the overall play area, making defensive positioning increasingly difficult while simultaneously increasing the danger that players will fall or be forced off of the map. In order to help make the game more replayable, levels in Worms are also randomly generated, and prior to a match players can cycle through maps indefinitely until they find one to their liking. Several other aspects of the game are adjustable as well, though not all of these variables have a dramatic affect on gameplay. Team and individual worm names can be changed, starting hit point totals can be set between seventy-five and five hundred points, and the intelligence level of A.I. opponents can be tweaked. The availability of all of the game's default weapons can be tailored to suit personal tastes, and Sudden Death, a late-game stalemate breaker that reduces all worms to one hit point, can be made to occur sooner, later, or not at all. A number of other variables exist as well, such as default worm placement and turn length, and an optional Banzai mode is also included which makes explosions even more destructive.

The Worms arsenal includes more than twenty weapons and utilities that vary in strength and purpose. All but three of these tools are given automatically to the player during a match, while the others are designated as "super weapons," and must be collected from randomized weapon crates (although these crates can also contain other weapons or booby traps). A wide variety of different armaments are represented in Worms, including melee weapons, firearms, and a variety of explosives that may be thrown, dropped, propelled by rockets, or conveyed in less-than-orthodox ways. Some usable items are classified as utilities, and while these objects may cause damage to enemies in some cases, the intent of utility items is generally to offer worms additional mobility or defensive options. Weapons can be selected either by right-clicking in order to bring up a weapon selection panel or by hitting their associated function key.

Worms was fairly well-received upon its release in 1995, and many critics commending it for having easy-to-grasp yet strategic gameplay, a humorous, lighthearted presentation, and a great deal of customization options and replayability. The original version received a great deal of positive attention from the Amiga gaming press, with a large number of review scores falling within the ninetieth percentile. Ironically, Amiga Format, the very same British publication that had failed to acknowledge Davidson's game when he submitted it into their yearly Amiga game competition, issued a glowing post-release review of Worms in their 1995 Christmas issue, saying that it "thoroughly deserves to be a real smash."