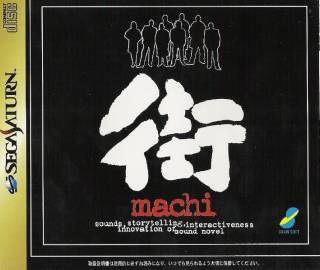 A Japanese sound novel initially released for the Sega Saturn in 1998 where the player swaps between eight different characters in the city of Shibuya who's stories are all happening in tandem.
PlayStation Portable

Machi (街), which can be translated as "Town," is a piece of interactive fiction popularly known in Japan as a sound novel where the game is mainly about reading the game's branching narrative. The title was the third entry in Chunsoft's Sound Novel franchise and was published in Japan for the Sega Saturn on January 22, 1998. A port for the PlayStation was later released in 1999 and Sega published another port for the PlayStation Portable in 2006 that included new story content.

While a direct continuation was never made, a spiritual sequel to Machi was released by Chunsoft in 2008 called 428: Shibuya Scramble.

Machi is a story-driven adventure game that follows 8 different characters over the course of five days. The presentation of the game is made up of static pictures of characters and locations, though there are occasional animated cutscenes, and the majority of the player's interactions is through text. The player can switch between the different characters at any time to continue the story, and depending on choices made throughout the game the player can bring about a good or bad ending. All of the characters live within the city of Shibuya, and many of them can cross paths with each other depending on how the game is being played. For example, in one scenario playing as Gang Member Masami Ushio, the player decides how to best pull off a jewelry store heist. If the player is successful, Masami remains on the run throughout the rest of the game. This further complicates the story for other characters like Jintaro Umabe, who looks like Masami, and is unknowingly implicated in the jewelry robbery. If the player does not succeed in the Jewel robbery, Masami's story ends, and Jintaro does not get implicated at all. Choices with similar repercussions can occur for each of the eight other principal characters. The Japanese phrase used by the creators of the game to describe this mechanic roughly translates to "chain of fate".

Machi has garnered a strong following over the years in Japan with the game often ranking very high in lists of the best video games ever made. The title ranked as the 5th best video game of all-time in a Famitsu reader poll held in 2006 and in 2017 it also ranked 5th in another Famistu poll of the best adventure games [2][3].

However, during Machi's initial release, the game actually sold very poorly. Chunsoft's previous sound novel, Kamatachi no Yoru, sold 700,000 copies on the Super Famicom but Machi would only end up selling around 83,000 units on the Sega Saturn [1][4]. Even once the title was ported to the PlayStation, Machi's overall sales were still only 120,000 copies [4]. These sales were not strong enough to recoup Machi's production costs, which were rather high due to the use of live-action actors and sets, and Chunsoft lost money on the project [4]. For this reason, Chunsoft's next sound novel would be a sequel to Kamatachi no Yoru, instead of a new original story, and a direct sequel to Machi was never created.