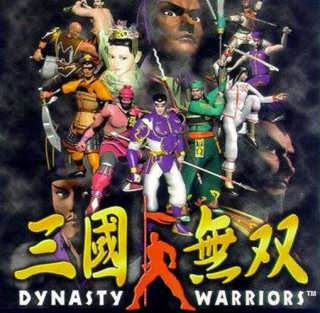 Dynasty Warriors (known in Japan as Sangoku Musou) is a 3D historical-fantasy weapon-based fighting game developed by Omega Force and published by Koei for the Sony PlayStation in Japan (on February 28, 1997), North America (on June 30, 1997), and Europe (on December 1997).

The game is a four-button fighting game similar to Namco's 1995 game Soul Edge, with two buttons used for attacking (horizontal slash and vertical slash/stab). Rather than a dedicated block button (or a simple joystick motion to block), players instead have to time their parries using one of two buttons (one to parry against horizontal slashes and one to parry against vertical slashes and stabs). The game also features special "Musou" moves with the use of a super meter (reminiscent of the Rage meter in the Samurai Shodown series).

Although the game received numerous sequels to this day, all of them are based on the studio's signature large-scale tactical third-person hack-and-slash system (known as Musou), pitting players (as their chosen general) against hordes of enemies on expansive battlefields. This shift in genre caused a disparity in the game's numbering scheme between original and international releases, as the international releases continued the "Dynasty Warriors" naming while the Japanese releases started fresh with the "Shin Sangoku Musou" naming. This causes international releases to be numbered one ahead of Japanese releases (for example, Dynasty Warriors 3 is known as Shin Sangoku Musou 2).

The Japanese version of the game was re-released twice: once on the PlayStation the Best series (on November 12, 1998) and once on the Koei Teiban series (on July 5, 2001).

Characters are split up into four color-coded factions: Shu (yellow), Wei (green), Wu (red), and unaffiliated (blue). In the single-player campaign, characters who are based on a particular faction will always fight those in opposing factions (with stages 1-3 based on one faction and stages 5-7 based on the other). For these characters, stage 4 is fought against Diao Chan, stage 8 is fought against a sub-boss (Cao Cao for Shu/Wu characters and Zhuge Liang for Wei characters), and stage 9 is fought against Lu Bu. Unaffiliated characters have different stage patterns unrestricted by faction.