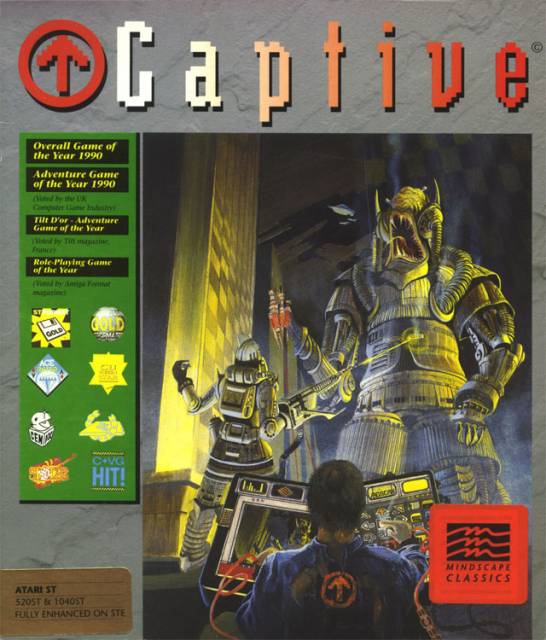 A dungeon crawler RPG in the same vein as Dungeon Master, only with a much more action orientated bent.

Captive is a futuristic dungeon-crawling action RPG where the player must escape imprisonment onboard an alien space station. To achieve this, the player has control of four robots, through a futuristic laptop computer. These robots are stationed on board their spaceship somewhere in the galaxy.

The location of the space station where the player is held is unknown to begin with. The only way to locate it is by guiding the robots through ten locations (levels), looking for probes that show the way forward.

Each of these levels take place in dungeons on planets. At the beginning of the game, the player is presented with a probe and a map of the current galaxy. This map features hundreds of planets, making it difficult to guess which planets hold a probe. By dropping a probe onto the map, a planet holding the next probe (and, ultimately, the space station) is revealed.

Each level has a scientist enemy that looks human but turns into a werewolf when attacked. When defeated, he drops a code that can then be typed into a computer that is located on the level. The computer then dispenses a probe.

Once rescued from the prison, the player has the option to continue playing. At that point, the aliens appear and whisk the protagonist and their laptop away to another space station and the whole thing starts again with the difficulty increased. Although there were a large number of pre-defined levels, the game also comes with a random level generator.

The top of the screen has monitor screens, one for each robot, plus a 'camera' screen. The use of these screens is covered below under the "Upgrades" section.

The left hand side of the screen is used to view the robots' environment from a first-person perspective.

The right hand side is dedicated to function buttons related to robot controls, a button for each robot's inventory, and icons for the robots hands (for details see the "Hands" section). There are also icons for instigating "sleep" mode (used for certain time-based tasks), pause, and save game functions.

At the bottom of the screen is a remote control button panel, used for activating "Upgrades", although.

The robots' view is displayed in a first-person perspective, and movement is grid-based. The party can only ever face North, South, East, or West. The party can rotate 90 degrees, walk forwards, backwards, and sidestep.

With a planet identified by a probe, the player has to land on the planet's surface and search for the dungeon entrance. Whilst on the surface, players would be attacked by dinosaurs. Players would then have to enter a specific code to open the door to the 'dungeon'. At the end of the level, having retrieved the probe for that planet, the player must blow up the base using explosives on the generators. When escaping the exploding dungeon, the player has to quickly escape and enter the door code while being chased by flames.

Each robot has a color and can be named. Each robot has armour for arms, legs, hands, feet, torso, and head. Improving armor also improves a robot's stats (maximum carrying threshold, resistance to attack, etc). The torso is the most vital item; it powers the robots. Players have to regularly top up the power supply for each robot from power outlets found around each dungeon. Damaged body parts can be repaired by shop keepers. Only depletion of the torso's health deactivates a robot.

Each robot also has "slots" representing a backpack inventory, and slots for chip upgrades. Using money found on the bodies of enemies, players can make purchases from shopkeepers that inhabit the game's dungeons. These upgrades include things like visors for seeing in the dark, mappers to provide a basic map, and an item that allows robots to walk on ceilings (this can be used to avoid corrosive water and to help hit certain enemies). Where and when appropriate, upgrades are displayed on the monitors across the top of the game view. Use of these upgrades drain the robot's torso power charge.

Robots can hold weapons in their hands. These can be bought from shopkeepers, or dropped by defeated enemies (however, these dropped weapons were significantly worse than weapons bought from a shop).

Weapons range from throwable balls, to swords, to lasers. Each weapon requires ammo that has to be stored in each robot's inventory. Weapons can also jam, forcing the player to reload, thus wasting ammo.

The use of armor and weapons is limited via an experience points system. Each robot gains experience from performing any and all tasks (even walking into walls). These points can then be spent upgrading the robots' stats. For example, the use of a Magnum VII may have required a handgun stat of 22 out of 24.