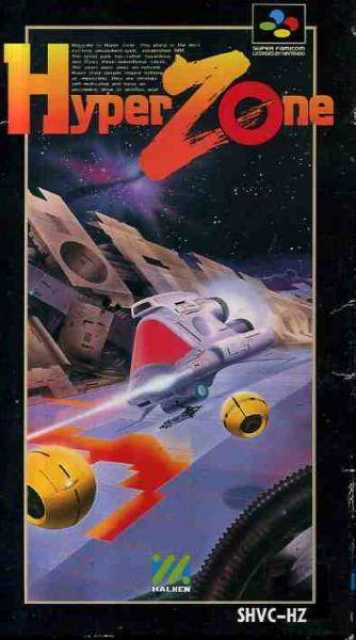 HyperZone is an "on-rails" futuristic shooter for the SNES.

HyperZone plays like a cross between a racing game and shooter. The object of the game is to navigate each level while shooting enemies and earning points, until finally an encounter with a boss ends each level. After enough points are acquired, the player earns an "extend" and his or her ship is upgraded in the next stage. The player's ship can receive up to six upgrades.

As a racing game, the resemblance is visual. The mode 7 "tracks" bear a resemblance to the well-known progenitor of mode 7 racing, F-Zero. As a rail shooter, in the same vein as Star Fox, the player's ship is constantly pushed forward through each level. While it is possible to slow down, doing so eventually causes damage to the player's ship.

HyperZone contains eight levels in total. After the initial game is finished, it restarts from the beginning with the player continuing in the same ship and keeping score; the game loops infinitely.
Battle Cars Accele Brid Thunder Ceptor Space Harrier F-Zero Yam Yam