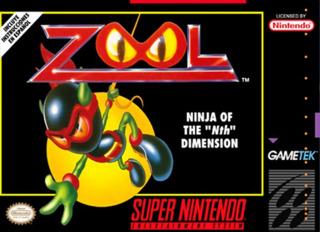 A very colorful fast paced platformer. Like Superfrog, Zool was destined to rival Mario and Sonic as the Amiga's own icon. The game features extensive product placement from Chupa Chups.

Zool is a platformer originally developed by Gremlin Graphics for the Commodore Amiga, and was later ported to multiple other platforms. It follows Zool, a ninja from the Nth Dimension who has crash landed on a mysterious planet and must traverse many different levels.

The gameplay in Zool is side-scrolling platforming gameplay in which the player's aim is merely to reach the end of the level, where a gold coin would be collected. Obstacles and enemies litter the 2D worlds, and the game is known for being very difficult. Zool has the ability to perform jumps, punches, kicks, sliding tackles, fire a "magic cannon" weapon and perform 4 different magic spells. The magic spells vary greatly, and include an invincibility spell, a fire blast spell which kills all enemies on screen, a duplication spell which creates a second Zool, doubling the players fire power and one that increases his jumping ability. Zool can also climb walls by clinging onto the wall, and jumping upwards before clinging to it again.

At intervals within a level there are checkpoints, which are different items in each world. Upon passing the point it will activate, and if the player is killed, Zool will respawn at the checkpoint. Zool can take 4 hits of damage before dying, and can replenish his life with flying hearts gained from killing some enemies. There is a score system which serves no purpose other than for players to attempt to achieve high scores. Killing enemies and collecting collectibles are the main methods of gaining points but they can also be gained from a variety of methods depending on the level. For example walking on the piano in the music world both plays a tune, and gives the player some points.

There are 7 different worlds in Zool, each with varying environments, enemies, collectibles etc. Each world has three levels.

The sweet world is a candy based world full of yummy treats for Zool to collect and kill. Enemies include jellies, bees and even a Bertie Basset. There are spike pits and spike creatures on walls and chocolate rivers which slow down Zool's movement. Rafts float on the rivers which can be used to traverse the rivers without slowing of movement.

The music world is a world of music. Musical instruments can be the players friends or enemies. Walking Cymbals and Drums are among Zool's enemies, while points can be gained by making music from walking along a giant music keyboard.

The Fruit & Veg world is a giant garden, where fruit can both help and hinder Zool. Brussel sprouts, carrots and grapes are the enemies. Other fruits, along with chopped off carrot tops can be collected to gain points.

Tool world is full of lethal tools. From hammers trying to hit him, to drills trying to drill him, Zool is not safe in this dangerous world. Greased platforms hinder his movement and makes him slide down drops.

The toy world features many dangerous toy based enemies, from marbles to toy tanks.

The fun fair world is anything but fun for Zool. Lethal hammers and candy-floss are some of Zool's enemies in this world. There is even an arcade cabinet in the amusement arcades which allows the players to play Zool.

The seventh world is hidden through the other levels, and takes a departure from the platforming gameplay, and is a space shooter.

Zool has multiple options for the background music in the game. The option to turn the music off altogether exists, along with 4 unique music styles, Rave, Rock, Green and Funk.