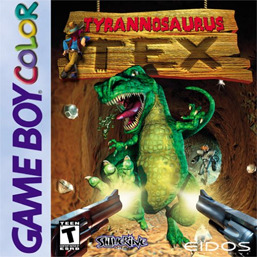 Tyrannosaurus Tex is a cancelled first-person shooter video game for the Nintendo Game Boy Color portable console developed by Slitherine Software and planned to be released in March 2000. The game generated high expectations, as it would have been the only first-person shooter released for the Game Boy Color. On March 8, 2016, Piko Interactive announced that they had acquired the rights to this game, and it was later released officially in May 2018.