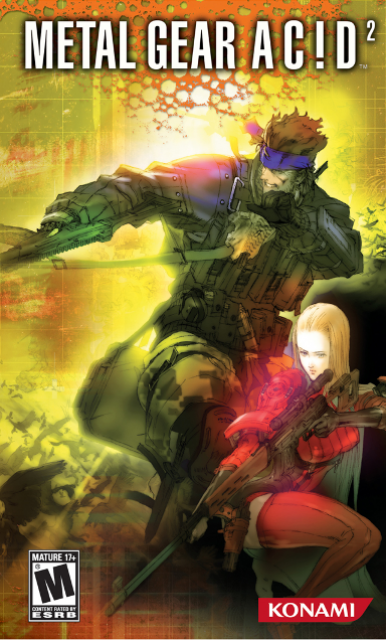 Metal Gear Acid 2 continues in the footsteps of Metal Gear Acid, but is not a direct sequel to the previous title. Rather, players are presented the story in a similar manner, and the game continues to expand upon the same card-strategy hybrid system of the previous title. One major change between the titles is the visuals. Where Metal Gear Acid adopted a strictly realistic direction like all previous 3D Metal Gear titles, Metal Gear Acid 2 makes use of a style that is reminiscent of comic books. Characters have thick outlines and cells of color, while retaining finer details and levels tend to have high contrasting color palettes. The series also experimented with "3D" images caused by two side-by-side images that create an illusion of depth in the visuals. This is accomplished in part by an accessory that was shipped with the game, the "Solid Eye." The simple attachment allowed users to look at the Playstation Portable screen through them with it separating the otherwise noticeable separation between images.

While not the last Metal Gear title on the Playstation Portable, it was the last title in the Acid series. Metal Gear Acid was followed by Metal Gear Solid: Portable Ops.

Metal Gear Acid opens with Solid Snake and several other characters in flight to the United States, but are apprehended by FBI agents for attempting to illegally enter the country. Snake is confronted by Agent Dalton who forces Snake to investigate a suspicious weapons corporation, SaintLogic, in order to clear his name. After several missions, things begin to escalate. Players find out through a turn of events that one member of the SaintLogic team is threatening to use nuclear weapons if their demands aren't met. Like in Metal Gear Acid, players eventually get control of a second character, in this case a woman named Venus.

Players familiar with the series will be feel at home on Metal Gear Acid 2. The turn-based collectible card system has remained intact and players have over twice as many cards to collect than in the previous title. Deck construction has not changed, and cards have retained similar purposes and functions from the previous titles. This time around, players who go through the game a second time will be allowed to "upgrade" the packs available at the card store, allowing them to unlock many cards that were otherwise unobtainable in their first playthrough. The game once again features many "character" cards that come from most every title from the Metal Gear franchise, as well as other games Hideo Kojima has released over the years. These cards will feature brief video clip from their associated title as an introduction to the card whenever they are played, but none are mandatory to view.
Metal Gear Ac!d Disgaea: Afternoon of Darkness Jeanne d'Arc Field Commander Warhammer 40,000: Squad Command Aedis Eclipse: Generation of Chaos The Lord of the Rings: Tactics Disgaea 2: Dark Hero Days Phantom Dust Growlanser Queen's Blade: Spiral Chaos Akatsuki no Amaneka to Aoi Kyojin: Pashiate Bunmei Kenkyuukai Koubouki Queen's Gate: Spiral Chaos