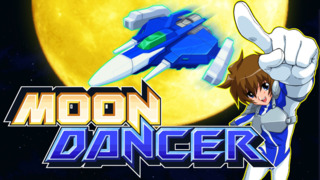 A vertically-scrolling shmup with lock-on mechanics from TERARIN Games

Moon Dancer is a vertically-scrolling shoot 'em up (or shmup) with lock-on mechanics similar to Galactic Attack/Layer Section or Kamui. Players begin a level with a basic omnidirectional shot. They can also move a targeting reticle over enemy ships to lock on to them. Releasing the basic attack button will fire a more damaging homing attack. Successively chaining homing attacks together is the primary scoring mechanic, where chained kills will drop crystals that can be collected for points.

There are also power ups that the player can collect to change the size/placement of the targeting reticle as well as the behaviour of the homing shot. Other power-ups can increase the size of the basic attack.

Both versions of the game support rotating the screen to portrait (or "tate") mode.

Moon Dancer features an Arcade Mode with three difficulty levels that allows players to experience the game's story over eight stages. There is also a 3-minute score attack or "caravan" mode, where players have three lives and three minutes to score as many points as they can.

Both modes have online global leaderboard support (the leaderboards do not appear to be cross-platform). There is also a local leaderboard.