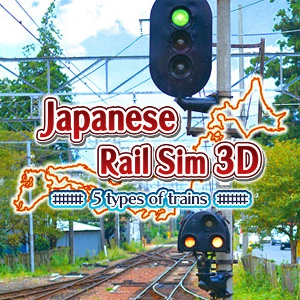 Japanese Rail Sim 3D: 5 Types of Trains (known in Japan as Tetsudou Nippon! Rosen Tabi: Ōmi Tetsudou-hen, which loosely translates to "Railway Japan! Route Trip: Ohmi Railway Edition") is a train driving simulation game developed and published by Sonic Powered for the Nintendo 3DS in Japan on May 21, 2015 (as a retail release) and in North America on November 22, 2018 (as a downloadable title).

The fourth title in the Japanese Rail Sim 3D / Tetsudou Nippon! Rosen Tabi series (after Journey to Kyoto), 5 Types of Trains follows the Ohmi Railway's entire Main Line in the Japanese Shiga Prefecture, from Maibara Station in Maibara to Kibukawa Station in Kōka. The game features five different trains to choose from (the 220-series, the 700-series, the 800-series, the 900-series, and the 100-series), each with their own unique sounds, recreated cab interiors, and performance (some with faster acceleration, some with stronger brakes).