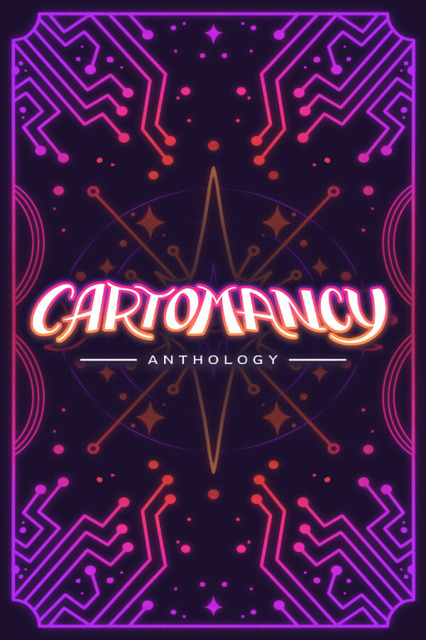 A collection of 22 games themed after the major arcana, each developed by a different team.

The Cartomancy Anthology is a collaborative project by 22 developers, overseen by Compact. The collection has 22 entries across games, vignettes, and short stories, each developed by a different group given only the theming of one of the 22 major tarot arcana.

Cards are drawn randomly for the player individually or three at a time, and once a card has been drawn it enters the player's deck, for replay at the player's discretion. Drawn cards also show developer credits and brief overviews, offering the player the ability to skip a card should they so choose.

A short story from the perspective of a magician who fears they have lost their touch.

A combination adventure and puzzle game. A seer worries about their ability to inherit the role of High Priest. As a result, the current High Priestess sends the seer to a troubled village, hoping they can help its residents. Puzzles are played by placing patterns from tarot cards onto a board, flipping white tiles to black.

A puzzle game centered around growing plants to navigate an isometric environment. Players must plant elevating sunflowers and choking, scaffolding vines to put shards of glass back where they belong.

The player is summoned to the Realms of Dream as the emperor's newest chef. A daily poem from the emperor suggests a day's themes of focus, and the player must seek inspiration to prepare a meal fitting said themes, lest they be executed.

Developed by Angela He and Jojo.

Citizens throw an impromptu party following rumors that the Head Necromancer has died. Players spend the night seeking different partners to dance with. While dancing, the player's partner will lead, dropping a path for the player to follow by guiding with the mouse.

Two magicians set out to perform a ritual beneath a growing storm. The player controls their chariot, determining which magician's favored style — order or magic — will be more pronounced in the ritual.

Players are tasked with punching incoming e-mails in order to deal with them. E-mails come in faster as the player progresses, and five missed e-mails will net a game over.

A branching story about hiking, mountains, and memories.

A fishing game following a scarecrow who gathers ingredients for a witch. Fishing happens by reeling in the line within certain timings from a bite, with faster reels yielding rarer fish. Fish have several catch conditions, including weather and time of day.

An oracle's help is requested by a man whom the oracle can tell is lying. The oracle can only respond via music, done by moving the mouse between notes in a hexagonal arrangement.

Players operate a magical convenience store. While customer requests will vary from common objects to abstract ideas, the player can only serve them items made by combining concepts from a set of nine. Alternatively, customers can be given a Part of Yourself for guaranteed satisfaction. Higher satisfaction yields higher pay. Days are lost when daily profit becomes negative.

A black-and-white vignette of Death riding its horse across the land.

A potion-crafting simulator. Players take potion requests from customers while aiming to create a potion great enough to secure their legacy. Potion-crafting is controlled by adding ingredients to regulate the "state" of the potion, with different potions being ready at different positions along the State Bar. Right-clicking ingredients that have been used before tells their impact on the potion's state.

A short story about a child forbidden to leave the forest.

A kinetic novel about a worker slowly being overtaken by their job maintaining a dilapidated clock tower.

A combination gardening simulation and visual novel. As a recently deceased soul brought to the afterlife as a scarecrow, players determine which souls deserve into The Garden and help them grow for the harvest.

Developed by The World Club (Edanur Kuntman and Chris Williams.)