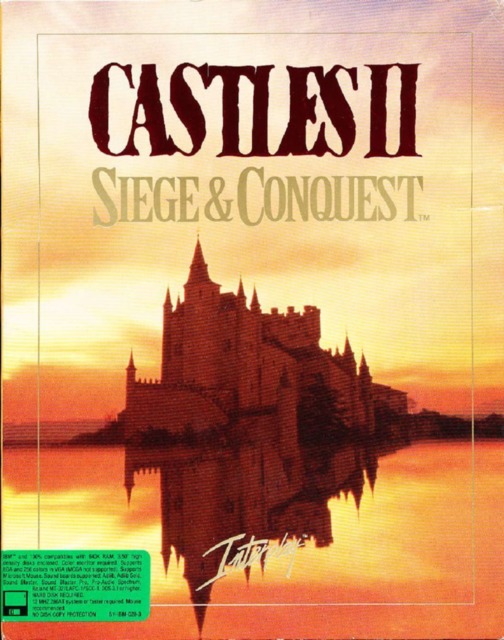 Castles II: Siege and Conquest puts the player in the shoes of one of five Dukes in Bretagne in 1311. King Charles is dead without an heir and the crown is up for grabs. Through politics, resource management, military strength and castle construction the player must strategically out maneuver his AI competitors and become the true king of Bretagne!

The majority of Gameplay takes place on a map of Bretagne. Here you have management over your three area of power- administrative, military and political. From the main screen you can dictate how you want your points in these three aspects to be spent at any one point in time. Depending upon how many points at a time are devoted to an action determines how quickly the action will be co mpleted. Everything from Diplomacy, Spying, Attacking, Harvesting and recruiting troops is completed in this way. This allows for a great level of control in the urgency of completing tasks.

When the player opts to visit a territory for combat or castle building the game switches to an isometric view. Castle building consists of simple wall, door and tower placement, with larger castles taking longer to build but providing better benefits for your fiefdom.

Combat itself consists of the the two armies consisting of knights, infantry and archers battling on these same screens. Seeing as controls for combat are extremely simple the player has little ac tual control over the outcome of battles besides considering when or if to sound the retreat. Sin ce the defender uses only half of his army and the attacker is allowed his full army, an aggressive playstyle is a key factor in military victories.

Throughout the game, story points appear in the form of short clips of text (sometimes prefaced by old black and white mov i e clips) which offer branching paths. The results from these differing paths can have both beneficial and negative impacts on your quest for the throne. An example would be allowing the church to put suspected witches on trial, which could raise your standing with the church, but lower your kingdoms happiness.

Victory in Castles II can be achieved by either winning the backing of the Pope, or by conquering the entire map (Pope Included) although the latter is more difficult seeing as how attacking the Pope will result in the players excommunication and the loss of all happiness in the players kingdom.

To receive the Pope's backing, the player must have sufficient lands and miltary might to validate his claim. He must then be in high enough standing with the church throughout the time the Pope considers his claim. If the players is successful in these regards, he may well be pronounced the King of Bretagne and win the game.

The game posses a simple midi soundtrack that can be turned on or off. The Main Screen, The Pope, Combat and the Opening Scene all have distinct songs.
The game has no sound effects.

Castles II: Siege and Conquest, like many games of it's era, has in game copy protection to prevent its illegal distribution. It takes the form of a pseudo plot point that always revolves around the player answering a qustion with the help of the Instruction Manual, to prove that they are the rightful king.

If the player fails to answer two of these questions, the game ends and must be restarted.