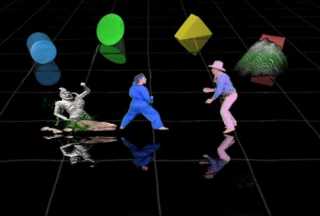 Time Traveler is a laserdisc FMV arcade game where the player controls Marshal Gram as he travels through time warps in order to save a damsel in distress. The most notable aspect of the game is its graphics, which appeared to look like holographs.

The holograph effect was achieved with a TV screen and an angled concave mirror.

The gameplay is similar to Dragon's Lair and Space Ace.

The game was never released on a home game console, but it was released on DVD which allowed it to be played with a remote control.