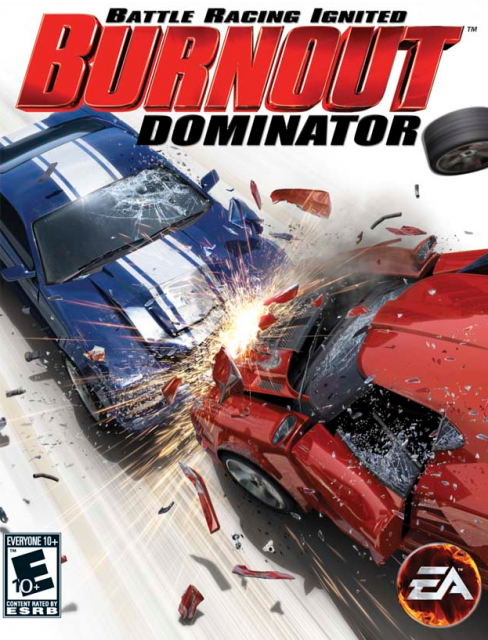 Burnout Dominator is a Burnout title with a strong emphasis on boost chaining. It is possible to boost nonstop so long as the player continues to drive recklessly while boosting.
PlayStation Portable PlayStation 2 PlayStation Network (PSP)

Released on March 6, 2007, Burnout: Dominator was released in between Burnout Revenge and Burnout Paradise, and serves as a stopgap release that compiles some content and ideas from the previous Burnout games and compiles it into a new release. Developed by EA's UK branch, this is one of the very few installments that have been developed outside of Criterion Games, the series' originator.

Players compete in a World Tour divided into seven series based on different car classes, Classic, Factory, Tuned, Hot Rod, Super, Race Specials, and Dominator. From here you can race in several different challenges such as the Classic Race, Road Rage, Eliminator, Maniac Mode (driving very dangerously at oncoming traffic, doing jumps and getting near misses, all for more points), Drift Challenge, Near Miss Challenge, and others.

Locations in Burnout Dominator include Europe, the Far East, the USA as well as South America and Eastern Europe (both exclusive to the PSP version).

Compared to its predecessor in the franchise, Burnout Revenge, Dominator has some significant differences. First of all, the ability to traffic check same way traffic isn't present, but burnouts (the ability to chain together the boost meter for non-stop turbo speed) are back in. Also, there is no crash mode.

Burnout Dominator has about 36 cars (each Series from Classic, Factory, Tuner, Hotrod, Super, and Race has 5 cars each, the Dominator class has about 1 car from each Series) and most of the cars are based on real life vehicles. The game has the second highest amount of returning vehicles including the Custom Coupe Ultimate from Burnout 2, the Euro Circuit Racer from Burnout 3 and the Low Rider from Burnout Revenge.

Most common events in Dominator but all together there 11 events.

All race tracks in Burnout Dominator.

With it's built in wifi capabilities, this allowed EA to put out two downloadable tracks exclusive to the PSP version of the game. However the servers have been closed and it is therefore no longer possible to download these tracks.

There 33 licensed songs, including a theme song from Burnout 2: Point of Impact in the opening menu.

Despite not being in the official compatibility list, Burnout Dominator can be played on the PS Vita. To do this, the user must first download the game to the PS3. From there, go to Content Transfer on the PS Vita and select the game for transfer. Once complete, the game will show up on the Vita's menu.