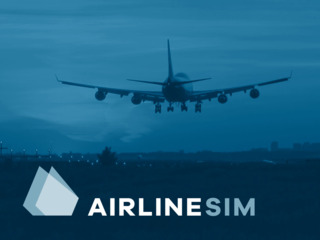 In AirlineSim, players create and run their own airlines and compete with others in a virtual market using realistic planning and management tools.

AirlineSim is a browser-based business simulation in which players build virtual airlines and compete for passengers in a real time market. In order to develop their companies, they have access to comprehensive management tools that are modeled after real world IT systems.

From assembling aircraft and scheduling flights to monitoring finances and forming alliances – players have all the instruments they need for developing their own aviation business.

Currently, the game's official languages are German and English but community translations for Spanish, French, Dutch, Polish and Chinese are available, too.

Generally, AirlineSim aims to offer a realistic playing environment: Game elements such as management tools, passenger demand and airport capacities are designed after their real world counterparts and, as mentioned above, the virtual market operates in real time as well.

To provide a better idea of what the actual game is like, the following sections outline some of the basic steps of founding a new company.

Getting the Airline off the Ground

After registering their airline, players start building their fleet by leasing or buying machines. Depending on the game world, different aircraft types are available. In order to further customize their product, users also have the ability to create detailed cabin configurations and service profiles.

Once the fleet has been set up, players can evaluate routes, open up stations, hire maintenance contractors and start planning their flight schedules. The game's Online Reservation System (ORS) then distributes the virtual passengers between player-generated flights. As soon as the schedules are ready and the connections have been booked, the fleet is ready for take-off!

Now that the company is up and running, players can gain more insights regarding the market situation and their competitors' businesses by using the market analysis tool. If necessary, they can adjust prices and service levels accordingly. In-depth reports on their own performance can be found on the Inventory or Load Management pages.

AirlineSim isn't only about competition, though. Players can interact with each other by leasing out aircraft or providing terminal capacities. They also have the ability to create interline agreements and form alliances if they want to connect with other companies even further.

On 3 December 2021, the development of a prototype called the AirlineSim Technology Demonstrator (ASTD) was announced. This project serves to explore what the future of the game can look like.

Its focus lies on implementing a Distribution System (DS) which is supposed to enhance the game's Online Reservation System (ORS) by taking real world aviation concepts like interlining and booking classes into account. This should allow players to create different company types such as low-cost airlines or network carriers.

As the ASTD represents a prototype, many features of the current version of AirlineSim will not be included. Still, players will be able to try out the prototype as part of an open development phase currently scheduled to begin in mid 2022.

AirlineSim utilizes a prepaid "pay to play" model where players buy credits in order to access the game. This is meant to avoid on-going subscription contracts and enhance game immersion and fairness.

New users can try out the game for free as their accounts are equipped with 60 credits that last for around two weeks.