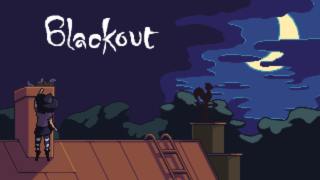 Point & click adventure set in a mysterious house, where things aren't quite what they seem...

Blackout is a point and click adventure game originally developed during Ludum Dare 48.

Marilyn, a teenage-looking girl dressed as a witch, begins her journey on top of the roof of an old house. While reaching for a bird's nest on top of the chimney, she loses her footing and falls down. Confused, she tries to find her way inside, not knowing who or where she is. Upon finding a key, she enters the house and is immediately greeted by the sight of a corpse. She begins to wonder what has happened here, and needs to find a way out.

While lost in the dark, Marilyn meets upon various, odd characters, all asking or craving something of her. Her thought is that maybe she might be able to leave once everyone is satisfied. But there might be more to this. Marilyn comes upon an old key, and a piece of paper with instructions for an old grandfather clock in the main hall. After unlocking the clock face and setting the noted time, a secret door reveals itself. Though hesitant, Marilyn enters and goes down a set of stairs. It's a basement. There's light coming through another door. loud noises echoing. She takes a final breath and steps through the door. A group of cloaked figures are surrounding a single cindle light, summoning what seems to be dark spirits...

...it's just a Halloween party.

In one of the upper floor bedrooms there's a bookshelf with plenty of things to interact with, including a Game Boy playing Scrambl'd, which was the team's Ludum Dare 46 entry. There are also Star Wars figurines, including a TIE Fighter, C-3PO, R2D2 and Luke Skywalker.

At the end of the second act there is a music track featuring vocal chanting. The lyrics to this chant is the commonly used placeholder text, Lorem ipsum dolor sit amet.