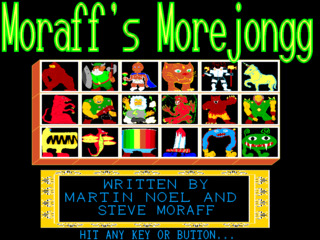 Moraffware's signature shareware mahjong solitaire game for DOS (and later Windows) PCs. It received numerous revisions and alternate versions (like Spherejongg or Ringjongg) from the mid-90's to the mid-2010's.

Moraff's Morejongg (later Moraff's MahJongg) is a shareware mahjong solitaire game developed and published by Moraffware for MS-DOS PCs in 1992. It received numerous revisions for Windows PCs from March 1995 to February 2017, with later versions released as Software Diversions, Inc.

A standard mahjong solitaire game, Morejongg makes use of high-resolution XGA graphics (with support for up to 1024x768 resolution) and includes multiple crudely-drawn tilesets and other customization options. Along with the traditional "Turtle" formation, the game included 23 8×6 layouts and 5 11×11 "mega" layouts (which use double the tile amount, using a secondary tileset). It was originally sold as shareware (with only two layouts available), with the registered version also including a bonus concentration game (Moraff's Monster Memory).

The game later received multiple Windows versions, featuring additional layouts, MIDI music, and higher-quality tilesets and backgrounds (with later versions combining them into "themes"). Alternate variations of the game were also released as shareware (such as Moraff's Spherejongg, Moraff's Ringjongg, Moraff's 3D-Jongg, and Moraff's YourJongg). The final version of the game, v14.5, was released on February 2017 as Moraff's MahJongg XIV International.

Most versions of the game include 49 layouts, with 48 of them split into two groups: Big Tile, and Mega-Morejongg. The other layout, known in the DOS version as "Monster Shanghai" and in Windows versions as "Traditional", is based on the common "Turtle" layout.

These layouts are 8×6, which are scaled-up with the application to make the tiles look large (hence the name).

Added in the Windows version:

These layouts are 11×11 and make use of a secondary tileset, essentially doubling the amount of tiles from 144 to 288.

Added in the Windows version:

In addition, the game received a slimmed-down demo on May 1995 known as Moraff's Tinyjongg, fitting the shareware v2 version on a single 250 KB executable file for easier redistribution (with only five basic tilesets).