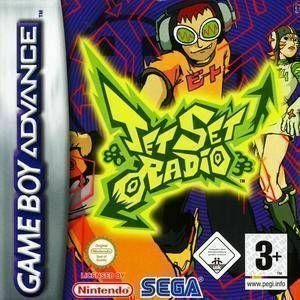 Jet Grind Radio Advance (or just simply the Game Boy Advance version of Jet Set Radio) is a 2003 video game published by THQ for North American and Atari for Europe. It is a "remastered" version of its 2000 counterpart that offers new game modes, different playable characters, and an all-new style.
Game Boy Advance

Three years after the original release of Jet Set Radio, Sega decided to develop a remastered version for the Game Boy Advance, along with several of their other games, including Space Channel 5 and ChuChu Rocket!. Although the plot remains the same, several aspects are change, including the character select menu, playable characters, gameplay, and style.

The plot of Jet Set Radio Advance remains nearly identical to its 2000 counterpart, but with some minor changes.

For the Game Boy Advance, the gameplay was changed drastically. Instead of ti being 3D with cel-shaded graphics, it now is 2D with an isometric viewpoint.