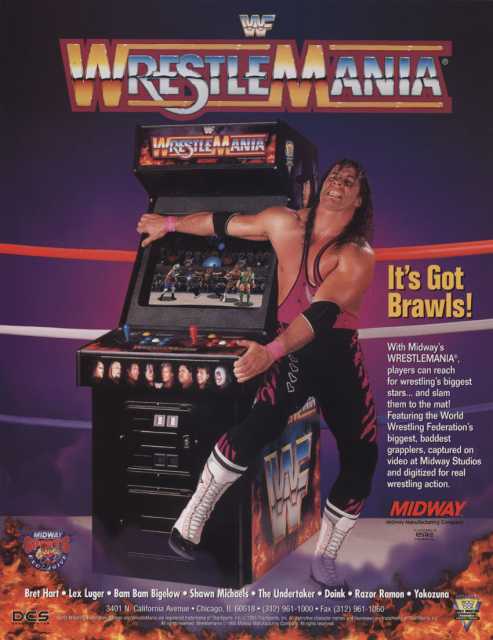 Throw reality out the window as WWF stars fight for the gold in WWF WrestleMania: The Arcade Game.

WWF WrestleMania: The Arcade Game is an exaggerated fighting game that uses digitized sprites of the featured professional wrestlers, similar to Mortal Kombat. Players battle through one-on-one, one-on-two, and one-on-three matches to claim either the Intercontinental Championship or WWF Heavyweight Championship. Vince McMahon and Jerry Lawler provided commentary and the game was later ported to home consoles by Acclaim Studios Salt Lake City, which would make the successor title, WWF in Your House.

Developed by Midway, WWF Wrestlemania plays similarly to Mortal Kombat, with a few exceptions. Characters can move in somewhat 3D space, in that they can walk up and down, as well as left and right. Combat features five buttons: Light Punch, Power Punch, Light Kick, Power Kick and Block. It is also possible to Run by pressing Light Punch and Light Kick together.

Each character has a unique ending.

The only known "finishing move", similar to a Fatality, is done by the Undertaker. Originally the game was scheduled to have finishing moves for each character, but the WWF shot down the plan.