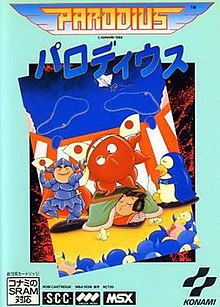 A comedic side-scrolling shoot-'em-up for the MSX and a parody of the studio's Gradius series.

Parodius (known in-game as Parodius: Tako wa Chikyuu o Sukuu, the sub-title loosely translated to "The Octopus Saves the Earth") is a comedic side-scrolling shoot-'em-up developed and published by Konami for the MSX exclusively in Japan on April 28, 1988.

As the title is a portmanteau of the word "parody" and Konami's shoot-'em-up series Gradius, Parodius spoofs the series with comical enemies (such as penguins) and environments (such as one made up of cakes). It also features use of classical music pieces for the soundtrack, the "Bell Power" system from the TwinBee series, a special capsule that gives a random power-up, and multiple playable guest characters to choose from.

While the Gradius series' Vic Viper is playable, the game's main protagonist is Tako, an octopus (with attire similar to a Japanese street vendor) who programs dreams. Other playable characters include Penguin from Antarctic Adventure (and its sequel), Goemon (from the Ganbare Goemon series), and Popolon (from the Knightmare series).

The game later received multiple sequels throughout the '90s, including some arcade and international releases. The game itself received a digital re-release in Japan as a Virtual Console title for the Wii (on January 12, 2010) and Wii U (on December 25, 2013). It was also included in some compilations (including the Konami Antiques MSX Collection series and Parodius Portable).

It features the same power-up system as the mainline Gradius games, where players collect capsules and use a dedicated button to choose that power-up based on the seven-step Power Meter.

One new addition is the "roulette capsule", a special version of the normal capsule that activates the Power Meter as a rotating roulette wheel (which is stopped and activated using the Power-Up button). This can be disabled in the options.

One new addition is the Bell Power system from the TwinBee series, where some enemies drop bells that can be changed by shooting it and can be collected to gain a temporary power-up: