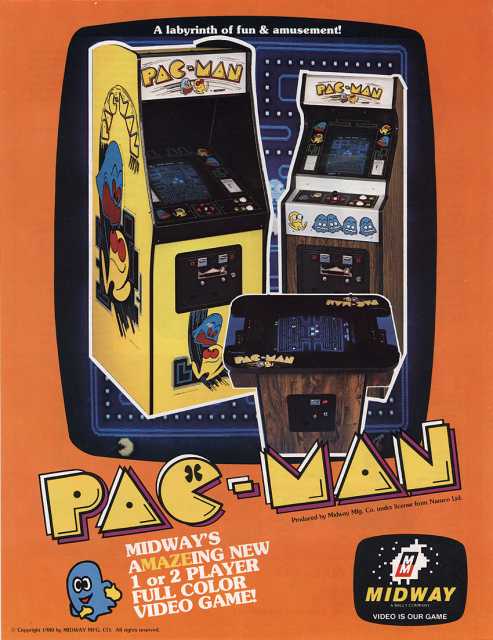 One of the most popular arcade games of all time, Pac-Man was released in arcades in 1980 and became a pop culture icon for the decade.

Originally titled Puck Man, Pac-Man hit the arcade scene first in Japan when Namco released it on May 22, 1980. Shortly after receiving a lukewarm response, the game was released in the U.S. by Midway. Compared to other arcade hits in the early '80s, such as Space Invaders, Galaxian, Defender, and Asteroids, Pac-Man put a friendlier face on its bizarre action and thus had the ability to appeal to a much broader audience. Toru Iwatani has said that he was looking for a way to attract women into arcades, which at the time were almost exclusively male locations. Having discarded ideas for a fashion based game and a love simulator, he had a eureka moment after a meal with his girlfriend. He noticed she ate a lot of dessert. Iwatani realized then that eating was a universal concept which he could exploit in a game.

The game was considered a smash hit in the U.S. and spawned many sequels and spin-offs, including an animated television show (known as Pac-Man: The Animated Series), a breakfast cereal, and the song Pac-Man Fever by Buckner & Garcia. Not to mention NFL star, Adam "Pac-Man" Jones, and eight-weight boxing champion, Manny "Pac-Man" Pacquaio.

The original Pac-Man game was ported to various systems, including the Atari 2600, Atari 5200, NES, PC, Apple II, Game Boy, Game Boy Color, Game Boy Advance, Game Gear, Commodore 64, Atari 8-bit, Intellivision, MSX, NEC PC-6001, NEC PC-8801, FM-7, Sharp X1, Commodore VIC-20, ZX Spectrum, Neo Geo Pocket Color, mobile phones, iPhone, and iPod. The game was also released as an Xbox Live Arcade game under the Xbox Live Marketplace. That version was also included in the compilation disc Namco Museum: Virtual Arcade. The NES version was also re-released for the Game Boy Advance under its Classic NES Series program and for the Nintendo Wii in its Wii Virtual Console platform. The arcade version was re-released as a secret game under the Ms. Pac-Man and Galaga 20 Year Reunion cabinet (in the game selection screen, move the joystick up, up, up, down, down, down, left, right, left, right, left, and press both start buttons before inserting tokens). In celebration of the 25th anniversary of Pac-Man the cabinet was re-released with Pac-Man freely playable. The arcade version was also bundled with compilation discs such as Microsoft Return of Arcade, Microsoft Return of Arcade Anniversary Edition, Namco Museum Vol. 1 for the PlayStation, Namco Museum 64 for the Nintendo 64, Namco Museum for the Dreamcast, PlayStation 2, Xbox, and GameCube, Namco Museum: 50th Anniversary for the PlayStation 2, Xbox, and GameCube, Namco Museum DS for the Nintendo DS, Namco Museum Battle Collection for the PSP, and Namco Museum Essentials for the PlayStation Network (PS3).

The Atari 2600 port is infamous for being considered one of the worst video games ever created. Having a very short development time frame and a very small staff, Pac-Man for 2600 wound up being a failed attempt at bringing an arcade classic home. Alongside E.T. The Extra-Terrestrial, it can be considered a major factor in the collapse of Atari, Inc. as well as the Video Game Crash of 1983.

The basic premise of the game involves the character, Pac-Man, a yellow circle with a slice cut out for a mouth. It's said by developer Toru Iwatani to represent a pizza with one missing slice as well as the general idea of a mouth eating. The player controls Pac-Man through a seemingly-endless amount of mazes, collecting pellets (or "dots") for points while avoiding the four ghosts (Blinky, Pinky, Inky, and Clyde, each with their own unique movement patterns). If the player runs into any of the ghosts, the player loses a life. However, the player can run into a power pellet, which make the ghosts temporarily edible for points. This ability, which most players would consider fundamental to Pac-Man, was absent from the game until mid-way through development as Toru Iwatani and his team were fed up being constantly chased and decided to turn the tables on the ghosts.

Players can also get bonus fruit pieces which show up at random intervals in each level. The primary goal is to maneuver around the level and eat up all the pellets without losing lives.

Veterans of this game noticed patterns about the four ghosts and have developed movement patterns for each level that guarantee success. While hypothetically there is no ending to this game, level 256 is considered a kill screen. A bug in the routine on level 256 eliminates most of the pellets on the right side of the screen, replacing them and the maze with garbled text and graphics. It is impossible to clear that level legitimately. Because this level marks an end-point, the game can have a "perfect play" where the player achieves the maximum possible score on the first 255 levels without losing a single life and then scoring as many points as possible on the kill screen before losing all his lives. The maximum score possible in this game is 3,333,360 points. The first person to achieve this score was Billy Mitchell on July 3, 1999.

The game was developed primarily by a young Namco employee named Tōru Iwatani over the course of a year, beginning in April 1979, employing a nine-man team. It was based on the concept of eating, and the original Japanese title was Pakkuman (パックマン), inspired by the Japanese onomatopoeic slang phrase paku-paku taberu (パクパク食べる), where paku-paku describes (the sound of) the mouth movement when widely opened and then closed in succession.

Although Iwatani has repeatedly stated that the character's shape was inspired by a pizza missing a slice, he admitted in a 1986 interview that this was a half-truth and the character design also came from simplifying and rounding out the Japanese character for mouth, kuchi (口). Iwatani attempted to appeal to a wider audience—beyond the typical demographics of young boys and teenagers. His intention was to attract girls to arcades because he found there were very few games that were played by women at the time. This led him to add elements of a maze, as well as cute monster enemy characters. Eating to gain power, Iwatani has said, was a concept he borrowed from Popeye. The result was a game he named Puck Man as a reference to the main character's hockey puck shape.

Later in 1980, the game was picked up for manufacture in the United States by Bally division Midway, which changed the game's name from Puck Man to Pac-Man in an effort to avoid vandalism. The cabinet artwork was also changed and the pace and level of difficulty increased to appeal to Western audiences.

Immensely popular from its original release to the present day, Pac-Man is considered one of the classics of the medium, virtually synonymous with video games, and an icon of 1980s popular culture. Upon its release, the game – and subsequent Pac-Man derivatives – became a social phenomenon that sold a large amount of merchandise and also inspired, among other things, an animated television series and a top-ten hit single.

When Pac-Man was released, the most popular arcade video games were space shooters, Space Invaders being the most popular. The most visible minority were sports games that were mostly derivatives of Pong. Pac-Man succeeded by creating a new genre and appealing to both genders. Pac-Man is often credited with being a landmark in video game history, and is among the most famous arcade games of all time. It is also one of the highest-grossing video games of all time, having generated more than $2.5 billion in quarters by the 1990s.

When first launched in Japan by Namco in 1980, the game received a lukewarm response, as Space Invaders and other similar games were more popular at the time. However, the game found far more success in North America. Pac-Man '​s success in North America took competitors and distributors completely by surprise in 1980. Marketing executives who saw Pac-Man at a trade show prior to release completely overlooked the game (along with the now classic Defender), while they looked to a racing car game called Rally-X as the game to outdo that year. The appeal of Pac-Man was such that the game caught on immediately with the public; it quickly became far more popular than anything seen in the game industry up to that point. Pac-Man outstripped Asteroids as the best-selling arcade game in North America, grossing over $1 billion in quarters in its first year, surpassing the revenues grossed by the highest-grossing filmStar Wars.

It sold more than 350,000 arcade cabinets (retailing at around $2400 each) for $1 billion within 18 months (inflation adjusted: $2.86 billion in 2014). By 1982, the game had sold 400,000 arcade machines worldwide and an estimated 7 billion coins had been inserted into Pac-Man machines. In addition, United States revenues from Pac-Man licensed products (games, T-shirts, pop songs, wastepaper baskets, etc.) exceeded $1 billion (inflation adjusted: $2.86 billion in 2014). The game was also estimated to have had 30 million active players across the United States in 1982.

Towards the end of the 20th century, the game's total gross in quarters had been estimated by Twin Galaxies at more than 10 billion quarters ($2.5 billion), making it the highest-grossing video game of all time (inflation adjusted: $7.16 billion in 2014). In January 1982, the game won the overall Best Commercial Arcade Game award at the 1981 Arcade Awards. In 2001, it was voted the greatest video game of all time by a Dixons poll in the UK.

The game is regarded as one of the most influential video games of all time, for a number of reasons: its titular character was the first original gaming mascot, the game established the maze chase game genre, it demonstrated the potential of characters in video games, it opened gaming to female audiences, and it was gaming's first licensing success. In addition, it was the first video game to feature power-ups, and it is frequently credited as the first game to feature cut scenes, in the form of brief comical interludes about Pac-Man and the monsters chasing each other around during those interludes, though Space Invaders Part II employed a similar technique slightly earlier. Pac-Man is also credited for laying the foundations for the stealth game genre, as it emphasized avoiding enemies rather than fighting them, and had an influence on the early stealth game Metal Gear, where guards chase Solid Snake in a similar manner to Pac-Man when he is spotted.

Pac-Man has also influenced many other games, ranging from the open-world sandbox game Grand Theft Auto (where the player runs over pedestrians and gets chased by police in a similar manner) to early first-person shooters such as MIDI Maze (which had similar maze-based gameplay and character designs). Game designer John Romero credited Pac-Man as the game that had the biggest influence on his career; Wolfenstein 3D was similar in level design and featured a Pac-Man level from a first-person perspective, while Doom had a similar emphasis on mazes, power-ups, killing monsters, and reaching the next level.