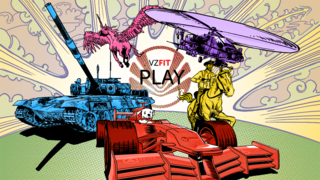 VZfit Play is a virtual reality game available for the Oculus Quest and Go. The game consists of 10 arcade style games designed to have users compete head-to-head and on leader boards while exercising.

VZfit Play is a compilation of arcade style games that can be played in virtual reality using the VZfit Sensor Kit,a stationary bike, and the Oculus Quest or Go. The VZfit Sensor Kit contains a sensor, that attaches to a pedal crank, and a handlebar controller containing a directional pad. To play the games the player will pedal to provide movement input, steer by leaning to the left or right, and use the controller to provide inputs for shooting, flying and other various mechanics. The games come in several styles; tank battles, indy car races, pegasus flying, attack helicopter, cycling and horseback riding. VZfit Play combines exercise and virtual reality to provide a workout while playing games.

The games come in several styles; tank battles, indy car races, pegasus flying, attack helicopter, cycling and horseback riding. All of the games are based on timed workouts and you can choose between a 10, 20, 30 or 45 minute play session when you begin.

The tank battle game is a wave based game where your goal is to defeat enemy AI tanks in progressively harder stages as you try to achieve the highest score possible. Defeating an enemy tank will cause them to drop an ammo box or a power-up to increase the strength of your current tank for a short time. The player can drive either a tank or a mech, each with slightly different gameplay mechanics. The mech is unlocked with upgrades over time. Tank offers two map options; Thunderbowl, a smaller desert map and Winterstan, a larger mountain area with snowy cold war feel.

Racing is a score chase game based on number of laps completed in the allocated time period. The player will try to optimize turns and pedal speed to best take advantage of the track and minimize lap time. The race also includes a turbo or boost power up that allows the car to go faster for a short period of time. Indy Car offers a traditional oval track and a more curvy touring grand prix style track to race on.

The pegasus games offers a unique combination of game play and movement. Pegasus games are the only games in VZfit Play that allows players to traverse on the ground as well as in the air. When on the ground Pegasus behaves like a horse and gallops along as directed by the player. Pressing the A button on the controller causes the Pegasus to unfurl its wings and take flight. The games for Pegasus both utilize this combination of movement options. In Gem Hunt the player is collecting gems and while in flight, trying to optimize flight paths and landings to collect the most points in the time given. Gate Race is a more traditional race along a curvy mountain pass where you collect apples to power up your flight. The flight in this mode is used to cut corners and to best optimize your path to reduce your time between gates.

Cycling in VZfit Play is a gate race score chase where you compete against AI opponents to optimize the number of gates you can ride through during the time chosen. The player is given several options for optimizing their performance such as drafting on opponents, taking shortcuts and riding the straightest line on the roads. Cycling offers two map options; Le Tour, a hilly french countryside and Cali Rally a Northern California coastal ride.

The helicopter game is a survival based game where the player is managing fuel, ammo and movement while shooting down missile turrets. Pedaling will increase the vertical height of the helicopter while shooting and diving are done via the controller. Helicopter offers one one level based on river basin with rocky outcrops and turns.

Jailbreak is the only game in VZfit Play that offers travel on horseback and has a unique timing based game play. The player inhabits the body of an Old West sheriff rounding up criminals after a jailbreak. The player must steer left and right and pedal to keep up with the criminals while capturing them with a lasso. The A button is held down and released when the lasso is in the right location capture each bandit.

Each game contains unlocks based on coins acquired while playing. These unlocks vary from purely cosmetic items such as stickers to game changing items like the Mech in the tank game.

The following games offer multiplayer modes to compete in head-to-head battles, or races. All multiplayer games come with built in voice chat and matchmaking to inform you when another player is available.

Events are run for each game with custom leader boards. Events are broken into single player and multiplayer events and each event has its own leader-board.

VirZOOM has a patent for comfort modes using game play controllers in virtual reality and all of the games are optimized for comfort. That being said every game is rated based on it's comfort level and they ratings are below: