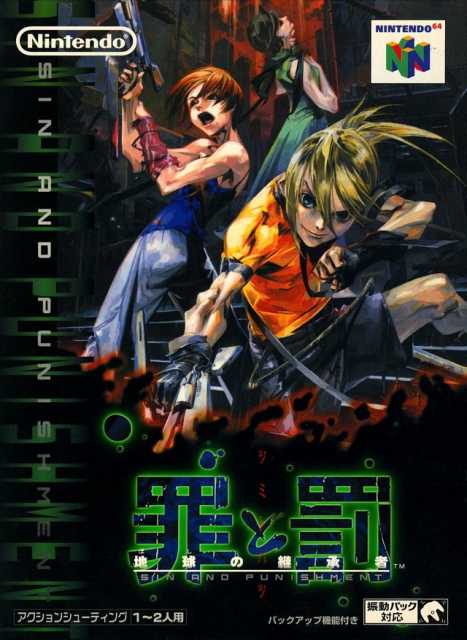 Produced by Treasure for the N64, this Rail Shooter is one of the most sought after Nintendo 64 titles in the console's library.

This game is a rail shooter, much in the same sense as Star Fox 64. Players will take control of Saki Amamiya in the first act, Airan Jo in the second, and regain control of Saki in the final act, as they shoot their way through swarms of enemies and gigantic bosses. This game is unique for a Japanese import, as it has a full English cast of voice overs, with Japanese subtitles. All the text was Japanese in the original N64 version, but the menu and score text was further translated for the release on the Wii Virtual Console.

The title was previously slated to be released in North America and regions outside of Japan, but due to lacking sales of the system by 2000, the game never made it outside Japan's shores. This game is highly sought after by import gamers, and is said to be a worth addition to any gamer's collection

The plot of this game is very confusing when you first start. The beginning of the instruction booklet to the original game contains the following text, explaining the backstory.

"It's the dawn of a new century, mankind has succeeded in maintaining peace and has prospered like never before. However, from this newfound prosperity has come a population explosion. This increase in mouths to feed has caused a strain on the food supplies of the world. Shortages of food became critical in all regions of the world. Mankind needed a new food source, one that could breed even under the most abnormal conditions; and so scientists began creating a "New Species" of life. After some time, the scientists succeeded in creating this "New Species" of life, and Hokkaido (The north-most Japanese Island) was chosen as the huge nesting pasture. The humans who succeeded in obtaining the new source of food expected their new found prosperity to continue again.

From the midst of the "New Species" came mutated beasts which suddenly began to devour their human hunters. The attacking hoards which formed a loose group henceforth became know as "Ruffians", they travelled south through the Japanese Islands and gained control over all of north-east Japan. In Tokyo the Ruffian began invading in front of the very eyes of the city's inhabitants, large-scale riots of confused citizens occurred frequently. This situation led to dispatch of an international peace organization called the "Armed Volunteers", but they began to use their military force to suppress the people of Japan.

As expected, the future of Japan has become again... bleak. And possibly so has the future of humanity. On the other hand, a mysterious rumour began to circulate among the people of Tokyo, where the battle for the survival of mankind is being lost day by day.

The arrival and appearance of an organization of citizens which call themselves the "Saviour Group"...

The "Saviour Group" were formed from a group of people who recovered from illness, injury & sorrow due to the miracles of a mysterious holy woman called "Achi". The "Savour Group" is a self-defense organization of Japanese citizens who support themselves by hunting Ruffian, they oppose the Armed Volunteers who they consider hypocritical masses.

Exhausted and wounded people began to gather to the holy woman Achi one after another, and ask for "salvation".

However, her "salvation" was not without a price. In compensation the healed must "fight" in the name of the holy woman. Many weak people became involved in many unnecessary disputes, and began following a path to despair..."

So, to summarize this up, there is a 3-way war going on throughout Japan. The Japanese rebels, the Relief Group. The private US military force, Armed Volunteers. And genetically mutated animals that prey on humanity, the Ruffians. At the start of the game, the Armed Volunteers have exterminated all but three remaining rebels (Saki, Airan, and Achi), the Ruffians are preparing to launch an invasion on Tokyo, and the remaining Relief Group must reach the Shinjuku station to take a transport out of Japan. It seems to go smoothly for Saki and co, and after killing the gigantic ruffian, Radan, an Armed Volunteers officer by the name of Kachyua mourns the destruction of "her research materials", and attempts to kill Saki.

After Saki, supposedly, defeats Kachyua, Tokyo becomes flooded by a mysterious red liquid (possibly blood of some sort), and Saki is transformed into a gigantic Ruffian beast, and fights a now transformed Kachyua in one last battle. Saki, all filled with rage, destroys the transport vessel containing Airan and Achi, but the holy woman escapes with Airan via teleportation, and Tokyo is left in ruins.

Meanwhile, off the coast of Japan, the Armed Volunteers Officer, known only as Brad, is grieved over the death of another general and close friend, Kachyua. Realizing the beast Saki has become, he vows to destroy him, and prove how more superior he is to Achi. The holy woman and Airan arrive intact aboard the Armed Volunteers flagship, and Airan fights her way to the bridge to fight Brad, to avenge her friends. The battle that follows continues into an aerial assault on the fleet, thanks to Achi's powers, and Brad is defeated, along with the Armed Volunteers morale. Brad uses his powers to commit suicide "in a final bit of justice," and a giant gunship is summoned, that fires a warhead at Saki.

The warhead is intercepted thanks to Airan and Achi's efforts, and the holy woman explains to Airan how they can help Saki return to his human form. Airan refuses to do so, as inorder to change Saki back to normal, she needs to shoot Saki to render him unconsious. As her mind conflicts, Airan finds her self with a young five year old boy on a subway train on Long Island. Airan fights her way through the train, and discovers that she is ten years in the future, and that Saki has sided with the ruffians. Airan realizes that she is in Achi's vision, of a future where Saki and Airan have son, by the name of Issa Amamiya, and that Saki has chosen to fight alongside the ruffians. Airan proceeds to shoot Saki, but realizes that her action affected Saki for real, and blames Achi for "using a child."

As Achi proceeds to revert Saki from his current state of being, she reveals her actual intentions. She claims her real enemies to be "very far away", and that she plans to use Saki as her weapon against the enemy, while not planning to save humanity or the earth in the process. Brad was actually the first person Achi had approached to use as her weapon, but after realizing the powers he had been given through Achi's blood, he became responsible for the creation of the Ruffians, and became responsible for the events mentioned in the backstory. After enfusing Airan within Saki's body, Saki regains his consiousness and teleports out of Achi's reach, to Hokaido. Airan wakes up on the shores, and finds Saki defending her against the oncoming Ruffians, except, half-human.

Both Saki and Airan race to find shelter and discuss their next plan of action. Airan suggests them heading to America, so they could find a doctor to help treat Saki's condition. A noise is heard outside, and Saki proceeds to investigate, leaving Airan vulnerable to capture by Achi. Saki returns to find her missing, and sets out to retrieve her, and confronts Achi after fight through a wave of Ruffians. Saki learns that his condition is caused by his feelings for Airan, that half of his heart is refusing her.

Saki is enraged with what Achi has attempted to use him for, and attempts to shoot her, though his cannon sword proves ineffective. Saki unleashes an energy punch with Achi's guard down, and Achi recovers from the attack and shoots into the atmosphere. Saki wakes up Airan, and asks her to "hold on to his heart," and Saki returns to his gigantic ruffian form and gives chase to Achi. The woman creates an earth mimicry to replace the current planet, and Saki uses all his power to destroy the mimicry before the real earth is destroyed. Saki is successful, but as Achi is defeated, she leaves the following message:

"The old earth die soon...killed by the very people it fed..."

The two return to earth, and Airan looks out to sea, calling Japan a "mess." Saki tells her about how he wanted to be a cop, and suggests that they go ahead and take on the rest of the ruffians. Meanwhile, in space, Achi ponders to herself about what she will do, now that "the enemy" is coming. But, realizing that Saki has inherited her blood, along with future generations from him, she realizes that a "new form of life" is establishing itself on "that planet," and now knows that her enemies will soon come to an end. Back on earth, Saki and Airan make they're journey to Honshu, and the two talk about the situation before them, and Saki's newfound powers. As the game credits end, Saki hints that they have another important mission ahead of them, saying that many preparations will have to be made.

The game is overall a railshooter, but the controls are very interesting. Using the control stick to aim, depending on what you're dominant hand is, you use either the D-Pad or the Left and Right C-buttons to make Saki (or Airan) strafe. Tapping it twice will do an evasive roll. The L or R button can be used for jumps, and the Z button is shoot, or when enemies and objects are in close proximity, sword. Pressing the A button will switch the targeting reticule between "manual" and "lock-on".

Lock-on does what you'd think, by sticking to the enemies, but it does less damage than manual aiming. Another interesting aspect is the co-op. The game says that it supports up to two players. It does this, letting one player control the character's movements, while the other controls the aiming. It's a unique form of co-op, and it is somewhat like Super Mario Galaxy's co-op.

While the original game in 2000 wasn't released outside of Japan, as was originally intended, it did not stop importers from getting the game. Sites that had imported the game had given the game positive reviews, and had guessed of the probability of the game coming to the Wii Virtual Console, back when it was first revealed at E3 2005.

On the first week of October 2007, the Virtual Console had it's first two games originally from Japan available for download, with Sin & Punishment as one of them. The reception remained positive.

One year later, at the Nintendo Media Summit, it was announced that a sequel, aptly titled Sin & Punishment 2, would be coming to the Wii in 2009. Nintendo said that both Treasure and Nintendo noticed how good the sales of the game on the VC were, and after some discussion, the sequel was created. The game would also be release worldwide, instead of Japan only like the first game.

Also, shortly after the release of the first game on the Virtual Console, an update on the Smash Bros DOJO revealed that Saki would make an appearance as one of the game's assist trophies. When summoned, he would jump and run around the stage, shooting and slashing at foes with his cannon sword.