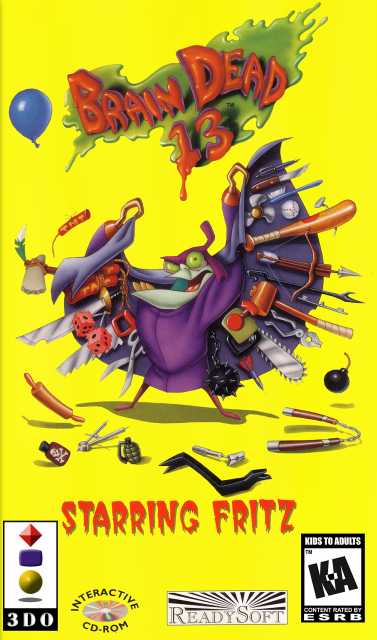 An animated interactive movie game similar in play style to Dragon's Lair. The main character is a young computer technician named Lance who gets called to a spooky castle.

Brain Dead 13 is an interactive movie adventure game that stars Lance, a computer tech, who is supposed to fix a computer in a spooky castle where he uncovers Dr. Nero Neurosis (a bodyless Brain) plot to take over the world. Lance finds himself being chased by Dr.Neurosis's servant Fritz. Most of the gameplay is much akin to games like Dragon's Lair and Space Ace, where the player has to react quickly to the scene by pressing a specific direction to progress the character to the next screen. Unlike most interactive movie games, Brain Dead 13 features branching paths allowing the player to choose which segment of the castle to tackle first. However, each segment has to be completed properly in order for the player to progress to the final showdown between Lance and Dr. Neurosis.

Features hand-drawn cartoons for every scene of the game.

The player has the option of choosing which segment of the castle to tackle, but they must all be completed in order to advance to the final showdown. In-between the segments there are smaller less interesting rooms and/or corridors which Lance must survive in order to progress. The larger, more iconic segments are as follows:

After all these sequences, players can advance to two other sections: