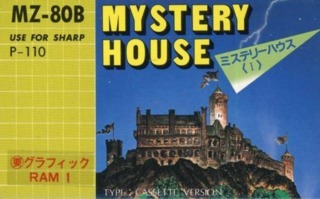 The first Japanese developed graphical adventure game created by Micro Cabin in 1982. Although it features the same name, it is otherwise unrelated to On-Line Systems' game.

Micro Cabin was originally founded in 1981 as a computer shop called "Micro Cabin Yokkaichi" located in the city of Yokkaichi in the Mie Prefecture. At the time, Micro Cabin was one of the few stores in the area that specialized in selling computer products and thus local computer hobbyists flocked to the shop. Micro Cabin's founder, Naoto Oyachi, was a hobbyist himself so customers would often share software they were making with him in order to get his feedback. One of these customers was a local dentist named Dr. Tsukasa Moritani who had made a game called Mystery House, a title about navigating an in-game environment to find treasure [6][8]. The concept was fairly unique for the Japanese PC market at the time when most titles were action oriented. Oyachi was so impressed with Moritani's game that he worked with him to finish the title and commercialize it [6]. The game would end up being the very first Japanese developed graphical adventure game and was a fairly big success for its time. Micro Cabin advertised that the game had sold around 30,000 copies and some believe that its sales were close to 50,000 if you include all of Mystery House's future ports (a large number during the early years of the PC market) [2][5][9]. Mystery House's success would transform Micro Cabin into a full-time game developer and the title's popularity helped cause an adventure game boom in Japan during the early 80s where the game inspired many other companies to publish their own adventure titles [4].

Micro Cabin's Mystery House was the first graphic adventure game many people in Japan played and it inspired many future game creators. Rika Suzuki has stated that she was introduced to the adventure genre through Mystery House and she even dumped the game's code to learn how the game worked [10]. This led to her creating her first adventure game in 1983 called Astrology Scramble and eventually becoming famous for authoring various titles such as the J.B. Harold series along with Hotel Dusk and Trace Memory. The creator of the Ace Attorney franchise, Shu Takumi, has mentioned that he played Mystery House on the PC-88 as an elementary school student [11]. Chiyomaru Shikura, producer of the Science Adventure Series, has also spoken about how one of the first games he played was Mystery House on the Sharp MZ-2000 which inspired him to start programming his own games with one of the first being an adaptation of his favorite adventure book into a text adventure [12].