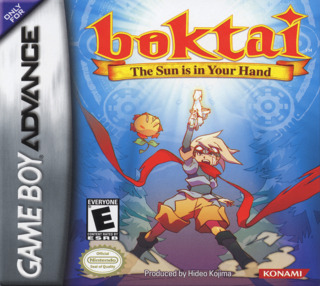 Boktai: The Sun is in Your Hand

The first game in the Boktai series of games by Konami.
Game Boy Advance

Boktai is an action adventure game produced by Hideo Kojima and developed by Konami.

In this game, the player takes control of a vampire hunter called Django who fights using a special gun called the Gun Del Sol. The most unique part about this game is that the cartridge has a solar sensor on it. This requires you to let sunlight hit the sensor to charge the Gun Del Sol. The amount of sunlight that hits it determines how fast your gun can recharge. Django has to either be outside or by a window in the game for it to work too. Thankfully, you can store some of the solar energy in various spots throughout the game in case of a rainy day.

The time of day also affects the gameplay. In the evening, the game will reflect that by it being gloomy. During the daytime, the sun is bright, especially when the solar sensor is in sight of the sun. Though, it is mostly the internal clock of the game that affects these changes.
This feature was also continued in its sequel, Boktai 2.