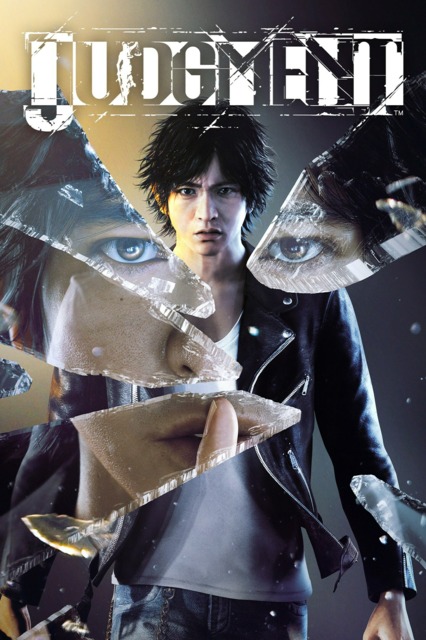 A “legal suspense action” game developed by Sega's Ryu Ga Gotoku Studio, the team behind the Yakuza games, for the PlayStation 4.

Judgment, known in Japan as Judge Eyes: Shinigami no Yuigon, is an investigative action game developed by the Ryu ga Gotoku Studio were the player controls a former defense lawyer turned detective named Takayuki Yagami who is trying to solve the mystery behind a string of recent murders. The game takes place in modern-day Tokyo and features both investigative gameplay, such as collecting clues and following suspects, as well as brawling combat similar to the Yakuza series. Sega published Judgment in Japan on December 13, 2018 with a Western release following the next year on June 25th.

Set in the same universe as the Yakuza series, the story begins with defense attorney Takayuki Yagami, who managed to win an acquittal on a murder charge for his client Shinpei Okubo in a Japanese justice system where nearly 99% of cases end in some form of conviction for the defendant. However, Yagami's career comes crashing down when Okubo is arrested for stabbing his girlfriend and setting her apartment on fire shortly after being acquitted.

Three years later, in Kamurocho, Yagami makes ends meet, running his own private investigation firm. When the area is rocked by the murders of multiple Yakuza from Kansai, Yagami finds himself dragged into the underworld to find those responsible, as well as the truth behind the incident that destroyed his own reputation.

Similarly to the two prior released Yakuza titles by Ryu ga Gotoku Studios (Kiwami 2 & Yakuza 6) Judgment runs on the Dragon Engine and utilizes the same combat mechanics and physics of said games. The combat plays slightly different, as you are now playing as a slender young detective, who specializes in martial arts type of fighting as opposed to the more brute force based street brawler tactics of Kazuma Kiryu. Yagami's heavy usage of kicks bears resemblance to that of Shun Akiyama, and Goro Majima, and like the latter he has different styles he can switch between.

One called "Crane Style" that emits a blue aura, which is a fighting stance that generally serves as crowd control, to deal with many enemies at once, and another called "Tiger Style" that emits a red aura, this style emphasizes on one-on-one moves. In addition to this, Yagami also has his own arsenal of Heat Actions, called "EX Actions" in this game.

When he is not beating up the local street thugs, he'll find himself having to do some proper detective work. This involves stalking suspects around the streets of Kamurocho, similar to that of Act 3 in Metal Gear Solid 4, and investigating crime scenes in vein of the Batman Arkham Games. Sometimes he'll do this while wearing a disguise too.