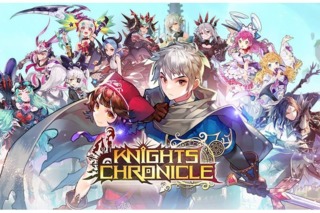 A free-to-play JRPG with 3D graphics and a gacha-style system for acquiring new characters.

A free-to-play JRPG with 3D graphics and a gacha-style system for acquiring new characters. The game was officially launched in Japan on March 2017, with an official English-language version released in the West on June 2018.

Set on the world of Garniel. Theo, a former Peacekeeper, returns to his hometown to find it overrun by monsters. When his town's council refuses to let him stay, Theo decides to go on a journey to find the source of the monsters and destroy them. However, his quest takes him across the continent and embroils him in a vast plot with consequences for the entire world.

The player can use up to 5 different characters that they control, equipping them with various runes, and use them in battle. Each character has 3 different techniques they can use in battle, including a basic attack that can be used any time and 2 other skills that usually require some cooldown time.

Combat in Knights Chronicle flows along an elemental triangle system where Fire beats Wind, Wind beats Water, and Water beats Fire. In addition, some characters may wield Light or Dark elements, which are weak against each other but neutral against all other elements.

Outside of combat, the main adventure takes place on a world map where the player can see their progress throughout the story as it unfolds, but can also return to earlier stages to achieve better results or earn missed rewards.

Some characters, once drawn or unlocked, will have an "Epic Quest" that the player can enter, in which they must complete a long series of challenges with the prize of unlocking that character's special costume with higher stats. While progressing through the character's Epic Quest, the player will unlock cutscenes displaying that character's backstory in greater detail than shown in the main story.

Some limited edition events with playable characters from other franchises that could be acquired during the promotion.