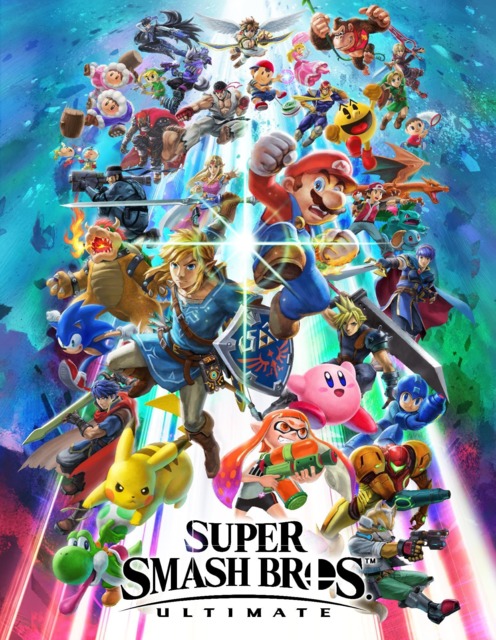 The Switch debut of Nintendo's flagship fighting game series brings together every character from the series' history, bringing the roster to over 70 fighters.
Nintendo Switch

The fifth installment of the Super Smash Bros. series (and the sequel to Super Smash Bros. for Wii U / Nintendo 3DS), Ultimate features the largest roster to date (including all characters and stages from all previous games in the series), with over 100 stages (and their Omega and new Battlefield variants) playable and over 800 songs in its soundtrack.

The game includes numerous gameplay and aesthetic changes (including updated UI, the ability to disable stage hazards, music tracks being organized by series rather than by stage, and an optional Final Smash meter that fills over time), along with new bonus game modes, a new single-player campaign mode (with the new "Spirits" system), and updated online matchmaking. The Character Customization feature of the previous game has been removed (with the exception of Mii Fighters, who now have a more limited version of the feature).

The game's base roster includes 72 playable characters (76 if counting all three Pokémon Trainer characters and all three Mii Fighter variants as separate characters). More will be added as downloadable content.

All playable characters from the series' history have returned, with Charizard reverted to being part of Pokémon Trainer. In addition, the game includes new characters (including some from Konami's Castlevania series and Atlus's Persona series) and a new classification of characters: Echo Fighters. Building upon the "clone character" concept from previous games, Echo Fighters have most of the same moves and properties as other characters (for example, Dark Pit is now classified as an Echo Fighter to Pit).

Unlike previous games of the series, Ultimate has most of the characters locked from the start (with the original 8 unlocked). Players can unlock new characters by either playing VS. matches, by clearing Classic Mode with other characters, or by encountering them in Adventure Mode. Mii Fighters are unique in that they are only unlocked by creating them in the Create Mii Fighters mode.

Similar to the bosses from previous games, players cannot defeat these bosses by knocking them off the stage. Instead, they must defeat them by depleting their Stamina.

Mechanically, Super Smash Bros. Ultimate is very similar to previous entries. Players fight with a variety of basic and special moves in order to build up the opponent's damage and send them off the screen. Final Smashes return as each character's most devastating attack. Some have been modified to be more cinematic and quicker. Instead of using the Smash Ball item, players can opt for weaker Final Smashes that charge over time.

The standard, traditional game mode. Up to eight players can fight together in free-for-all battles or on teams with a suite of options for rule customization.

When playing this mode, players now select their preferred ruleset, then the stage, and finally their characters.

Players fight with special modifiers to their fighters.

Up to 32 players compete in a tournament bracket automatically created by the game.

A 5-on-5 or 3-on-3 showdown. Players use consecutive fighters in an elimination style mode. When one fighter is KO'd, the next one takes its place.

Each fighter can only be used once before they are no longer selectable for future battles.

The original single-player mode. Each character has a set, themed sequence of fights leading to the boss, unlike previous entries where Classic Mode was randomized and always ended with a battle against Master Hand.

Rulesets are also variable between characters- for example, Ryu's classic mode features only 1-on-1 stamina matches to evoke the Street Fighter series.

The incarnation of Multi-Man Smash from past games. This is also where the All-Star Mode of this game lies - all currently available fighters will spawn endlessly.

An improved version of the training mode that now shows more technical data for moves.

Spirits mode takes aspects of trophies, custom moves, events and stickers from past games. Hundreds of spirits representing characters from Nintendo games (and the third-party franchises) can be collected and used to boost the abilities of fighters. Spirits have rarity levels, and can give additional buffs when equipped. They can also be leveled up, combined, and sent on expeditions.

To earn a spirit, players fight a match that is intended to invoke some aspects of the spirit's personality. This can include COM behavior, items, and other special effects. For example, the Guts Man spirit pits the player against a giant Mega Man who uses throw moves often.

Spirits can also be used in battles with other players.

While Ultimate's adventure mode has much less story than Brawl's Subspace Emissary, it still has some context as to why everyone became spirits. A godlike being, using an army of Master Hands, attacks the world. The smash fighters are unable to stop it, and they, along with the rest of the universe, lose their physical forms and become spirits. Only Kirby manages to escape, and finds himself in a new world where the other fighters have once again been corrupted.

In the game mode, players travel through several overworld maps fighting battles to reclaim spirits. Those spirits can be used to progress and explore more of the map. When a player wins a battle against a puppet fighter, that fighter is unlocked and joins the team. The mode goes through several locales, including outer space.

Online battles return with some notable changes. Matchmaking is no longer separated into "For Fun" and "For Glory" modes. Instead, players select their preferred rules for matches. The game will attempt to match players with similar settings. Matchmaking is also determined in part by Global Smash Power, a number representing how good the player is.

Once a player has a high enough Global Smash Power, they can play Elite Smash, a place where the best of the best can fight. The results of these battles will impact balance changes to the game made in the future.

Players can also make online tags, and earn the tags of opponents they beat. Other options include spectating matches, forming a two-player team, and creating online lobbies where they can set the rules and play with friends.

Super Smash Bros. Ultimate contains 103 stages from gaming history, most of them returning from previous games. Each stage can be reconfigured into layouts resembling Final Destination and Battlefield, for close to 300 possibilities overall. Even Masahiro Sakurai admitted "we must be crazy" to include so many stages.

For stages from the original Super Smash Bros., the team wanted to preserve the feeling of nostalgic 64-bit visuals and sound. For all other stages, the environments have been vastly overhauled for modern graphics and lighting.

Stages are also listed in the order they first appeared in the series. However, in a series first, every stage is unlocked from the beginning, and each supports up to eight player battles. Players can also activate a Stage Morph feature, where any two stages can transition between each other.

Each DLC character (other than Piranha Plant) comes bundled with an additional stage and accompanying music.

Super Smash Bros. for Nintendo 3DS and Wii U

The Super Smash Bros. series is known for its chaotic items which can change the flow of matches, and Ultimate is no exception. Ultimate also sees the return of Assist Trophies and Poké balls, items that summon another character to aid the player who used it. The roster of possible characters has also grown from past games, with 55 Pokémon and 59 Assist Trophies. Assist Trophies can now be KO'd, which adds a point to the score of the player who did so. As always, these items and the many others in the game can be turned off at will.

Super Smash Bros. Ultimate makes history with over 800 music tracks (around 28 hours) available to listen while playing the game. The My Music function returns, allowing players to adjust how often individual songs play on each stage. In past games, each stage had its own exclusive group of songs. In Ultimate, however, a stage can play any track from its own franchise.

The game also contains a sort of music player for the songs in game. Music can be organized into custom playlists. Players can then listen to music with earbuds when the Switch is in sleep mode. Despite the astronomical amount of music in Ultimate, Sakurai remarked that compression technology has advanced so that music only takes up a fourth of the space it did in the previous game.

Notably, the music staff was given nearly free reign to arrange whatever franchises they chose. As a result, Castlevania and Mega Man have many new songs, while franchises like WarioWare and Bayonetta were not so lucky. Final Fantasy's music is still limited to two songs ripped from Final Fantasy VII, likely due to rights complications.

Additional music is included in the DLC packs.

The Legend of Zelda series

The Legend of Zelda series: