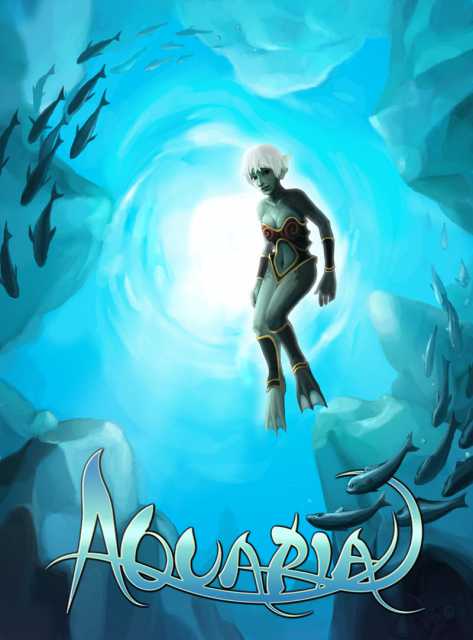 Aquaria is a 2D underwater Metroidvania game, in which players explore the underwater world of Aquaria while exploring the history of the world and the protagonist, Naija.

Aquaria is a 2D side-scrolling underwater action-adventure game developed and released by Bit Blot for the PC in December 7, 2007 and Mac (published by Ambrosia) in November 13, 2008. Players control Naija, a lone underwater adventurer, as she travels the underwater land of Aquaria in search of her past and the history of the land.

The game combines underwater swimming (in similar vein to Ecco the Dolphin) with the explorative concept of Metroidvania (in which players must explore a large 2D world in order to progress). The player can interact with the world through singing (in which certain combinations of notes give her special abilities) and combat (via special forms).

Naija is the game's main protagonist. She is a young mermaid who finds herself at the game's beginning living in a small cave with no memory of any other life. However, she soon encounters a vision of a shadowy figure who seems to beckon to her to leave the cave. When she does so she finds the world a desolate place full of abandoned civilizations. Most of the game focuses on her search for other living beings and her lost memories. She eventually learns that she is the daughter of the 13th god, Mia, and that she was created to destroy the overarching creator god who gave all other gods life before destroying each in turn. After completing this task Naija's mother kidnaps her and locks her away in a crystal, presumably setting up a sequel.

Li is a human explorer who met Naija once when she was younger, before she lost her memories. After that chance encounter Li, presumably, devoted himself to finding her again. Naija eventually finds Li scuba diving in the veil and, after kissing him, gives him the ability to breath under water. Li remains Naija's companion throughout the rest of the game until he is kidnapped by the creator god. After rescuing him Naija learns the ability to fuse with Li, making her a viable rival to the power of the creator god. After defeating the creator god, Li and Naija live together and have a son before she is kidnapped. The final scene of the ending shows their son setting out in search of Naija

The Waters of Aquaria were once populated by thirteen gods, each created by a single, overarching creator being. While many of them were primitive, a few went on to create races of their own giving rise to the civilizations that Naija encounters in the game. Each of the gods were meant to embody a different aspect of the creator god's mother with the final god, Mia, being his closest approximation. Most are driven mad by the creator god when he finds them lacking and imperfect, leading to the destruction of their respective races.

The 13 gods are as follows from first to last in order of creation (left to right in the above image) with locations where they can be found in parentheses*;

*Image and names adapted from information found on Aquaria Forums. Names may not be completely accurate.

The World of Aquaria

This is the first major location Naija finds after leaving her cave. As well as containing Naija's home, this area also contain entry ways to two of the game's civilization; the Erulians and Krotites. Both civilizations must be explored before Naija can advance from this early section of the game.

The Open Waters serve as the game map's central hub. From here naija can reach most of the other major locations of the game in almost any order she wants. To the West are the Home Waters, to the Northwest is the Kelp Forest, to the Northeast is The Veil, to the East is Mithalas, to the Southeast are the Arnasi, and to the South is the Abyss. While the region has little of story significance occur it does contain a number of significant secrets. naija can reach this area after exploring the Krotite ruins.

The Kelp Forest was once the home of a race of druids. As its name implies the region is a lush green forest full of a wide variety of creature, both hostile and otherwise. Naija can reach this region immediately after entering the Open Waters.

The Veil is a coastal region and the first place Naija encounters the Sun and the surface of the ocean. This is also where Naija meets Li. The Veil was the home to the race of Lumarians and still contains their Sun Temple. Naija can reach the Veil after exploring the Mithalas ruins.

The Abyss is the pitch dark bottom of the sea floor. While Naija can reach it at any time after entering the Open Waters it is almost certainly fatal to explore without first exploring the Lumarians' Sun Temple. The Abyss contains entrances to the Ice Veil (a frigid version of the Veil), the Sunken City, and The Body (the game's end point).

Civilizations of Aquaria and Their Rise and Fall

The Erulians were a people of peace. They were pink and elegant in appearance, their god, Erulia, likely representing the grace of the creator god's mother. They were skilled in the use of The Verse (the magical force of Aquaria). Unfortunately that was no defense from the aggression of the Krotites and they were ultimately eradicated by war. While exploring their former home in the Song Cave Naija learns the Lift song that lows her to telekineticly move loose objects.

The Krotites were a vicious, cat-like race of warriors. Their god most likely embodied the passions of the creator god's mother. While it is not entirely clear what led to their disappearance it is revealed to be in some way related to their wars with the other races. When Naija searches the remains of their city she soon becomes infused with the power of the Krotite god, giving her the ability to enter the Energy Form and fire bolts of energy. While in the city she becomes trapped and finds their god still alive but badly mutated and is forced to kill him to escape.

Mithalas was a city inhabited by a civilization of beings very similar in appearance to Naija. They were the most advanced race culturally and militarily with a stable monarchy allowing them a great deal of security. They were so safe and peaceful that they were able to turn their attention to matters of philosophy and spirituality in search for immortality. Mithalas' priests eventually discovered deep magics that could be used to such an end, but they required a price in blood. Mithalan citizens were force fed to Mithala, their god, turning Mithala into a monster who slew his entire race, except for the prince, who vanished, and the priests, who fled. When Naija confronts and defeats Mithala he gives her his form, the Beast Form, and tells her that she is the daughter of the 13th. Naija can also discover the priests in hiding and, upon defeating them, gain the Spirit Form.

The Druniads were a race of plant-like beings who tended to the lush Kelp Forest. They had no advanced civilization or city, but were intelligent. Their god, embodied by a tree, was likely the manifestation of the creator god's mother's nurturing. The Druniads were wiped out when the creator god drove their god mad in frustration. After Naija defeats the Druniad god she gains the Nature Form.

The Lumarians were an inventive and ingenious race of tinkerers. They built machines that allowed them to exist above the surface of the water and soon developed a deep reverence for the Sun, even building a temple to it. This made their god jealous and drive him to destroy them all. After destroying the Lumarian god Naija, ironically, gains the Sun Form.

Forms and Their Powers

In her regular state Naija is a relatively helpless mer-girl. She does, however, have one significant ability. In her normal form she is able to manipulate The Verse, the magical power of Aquaria, through song. In this way she is able to cast a small number of useful spells and, more importantly, transform into other, more powerful forms. This is also the only form in which Naija can change her attire.

Energy Form is the first alternate form Naija gains in the game. When in Energy Form Naija's skin takes on the appearance of searing magma and she gains the ability to fire powerful bolts of energy at her enemies. This is the most aggressive of Naija's forms and arguably the most useful in many fights.

In Beast Form Naija's appearance appears similar to a cross between a pink shark and the Creature From the Black Lagoon. in this form she is able to swim more swiftly and is powerful enough to overcome strong currents. She also gains the ability to devour her enemies by ramming them at high speed, granting a small portion of healing in the process.

In Nature Form Naija's skin becomes like bark granting her immunity to many natural hazards, such as spikes and stinging urchins. She is able to plant flowers that activate a series of natural shortcuts in the world. She is also capable of summon towering cactus-like plants that act as harmful barriers to her enemies.

When in Sun Form Naija's skin becomes a radiant yellow and glows brightly. She has absolutely no weapons or defenses in this form, but it is the only way for Naija to accurately navigate in the world's darkest regions. If she charges her energy in this for she can create a burst of light that will reveal a large area for an extended period of time, allowing her to briefly change forms in the darkness.

Fish Form, as per its name, allows Naija to become a small, swift swimming fish. Similar to Sun Form, in Fish Form Naija is completely helpless; however, in this form she can fit into small places that would otherwise be inaccessible.

This form is less a form and more a power. When Naija activates this form she leaves her body and become incorporeal, allowing her to travel short distances without taking damage. When in spirit form she can cross through a variety a barriers that would usually kill her and activate spirit crystals the instantly teleport her body to them.

Aquaria can be purchased at GOG and Steam.