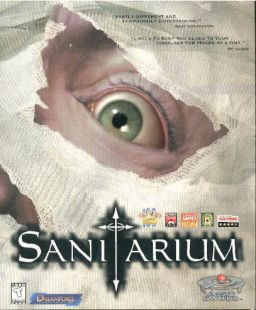 Sanitarium is an adventure-thriller in which you play as an amnesiac man named Max who wakes up in a sanitarium that is burning down. Journeying between different worlds, Max must discover why he is in a sanitarium and answer the question--is he sane or not?

The game takes place in a number of worlds and settings that present either the real world, the imaginary world, or a combination of both from the perception of the main character. Often, it is unclear to the player whether or not the level is the real world that the main character Max exists in, or if they are playing through a product of his imagination. This aspect of the game is a source of much of the horror throughout the game, and an underlying theme of the plot.

The game uses a bird's-eye view perspective and uses a 2D control scheme. It was re-released in 2002 and made compatible with Windows XP.

The player is tasked with finding clues, solving puzzles and interacting with other characters. This ultimately leads up to a scenario where the player must reach the end of a path, avoiding obstacles that seek to harm or impede him. If the player fails the task, he is transported back to the beginning of the scenario. At the end of the scenario, a cutscene is played, leading the player into the next level.