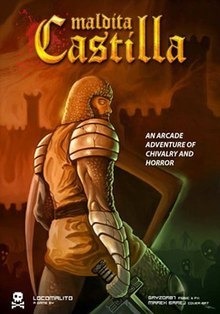 Maldita Castilla is a retro-inspired platformer which takes cues from legends across Europe, as well as Capcom's Ghosts 'N Goblins games.

Maldita Castilla ("Bewitched Castle", though "maldita" is also a common Spanish curse for frustration similar to "damn!") is a side-scrolling action game that resembles Capcom's Ghosts N' Goblins franchise. The player passes through multiple regions of the fictional Kingdom of Castile, attempting to stop a demon lord who has opened a gateway to Hell and the many demonic minions that have poured out from same. The game heavily borrows from Spanish mythology especially, with most of its creatures and supernatural concepts being taken directly from ancient Hispanic legends.

The game is currently provided free of charge from the site of developer Locomalito (a.k.a. Juan Antonio Becerra) and was made available to the PC and Ouya in 2012. It is a popular game for speedrunners due to its difficulty.