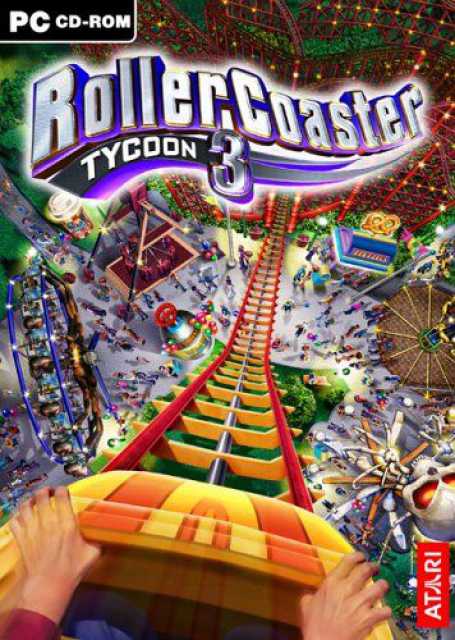 RollerCoaster Tycoon 3 is a strategy and simulation game in which players run their own amusement park and can even create custom rollercoaster rides.

This game is quite different visually than the other two games of the series. Instead of having 4 isometric viewing angles, RCT3 offers full 3D rotation of the camera. There is also an on-ride camera called "CoasterCam" which basically means players can experience the roller coasters and rides themselves.

The gameplay in RCT 3 has not fundamentally changed since the first game in the franchise. Players are the owner of an amusement park, and they have to build rides and attractions that will bring "peeps" into their park from, which in turn provide profit. In RollerCoaster Tycoon, players complete a series of preset scenarios by successfully building and maintaining theme parks. There is a huge variety of rides that players can choose to build. There is a large amount of different types of roller coasters to choose from, as well as gentle rides and thrill rides. When building roller coasters, players can choose from preset designs or customize their own designs. There is a large number of preset designs available, but some will need to be unlocked by completing the game's various career mode scenarios. Players can completely customize a park's landscapes by adding hills, valleys, and bodies of water.

Players have the responsibility of managing finances. Players can advertise, take out loans, and buy and sell land.

Themes and scenery now play a larger role than before. For example, if a player creates a sci-fi themed area, but places random pirate treasure chests around, peeps will get confused and the player will be notified.

There are two main modes in the game.

Players will have to unlock scenarios with mission objectives divided into three sets: Apprentice, Entrepreneur, and Tycoon. In order to complete the scenario, players must fulfill the goals of each level, unlocking the next set. The objectives usually consist of such things as keeping the park rating above a certain level for a certain length of time or having 2 roller coasters with an excitement rating of at least 7.

Players are given unlimited cash and a large amount of land so they can build their dream park. This is where a lot of the players creativity will go in RCT3. Unlike Career Mode, players are given all items already "researched". All different designs and types of roller coasters are available from the start.

Soaked! adds the ability to create water parks with rides, swimming pools and other pool objects such as hot tubs and lounge chairs. This expansion pack also included a feature that was in an update for RCT3 which gave players the ability to have underground pathways for tracks and rides. This ability was present in previous games too.

The RollerCoaster Tycoon 3 community now makes its own custom scenery and flat rides for the game.