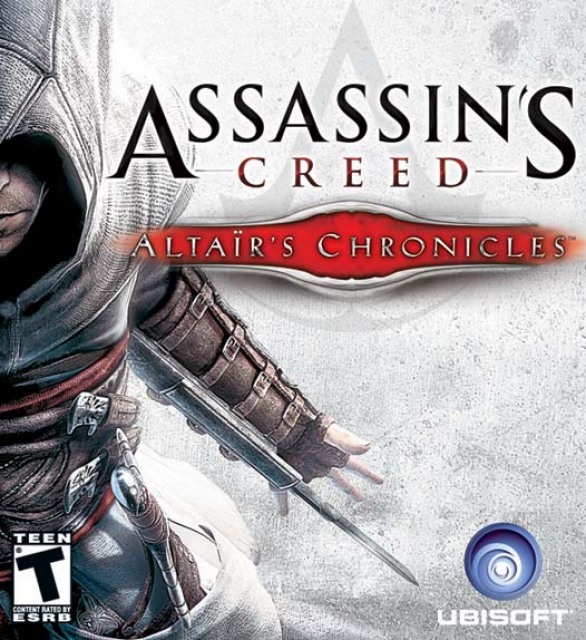 Assassin's Creed: Altaïr's Chronicles is a 3D action-adventure platformer developed by Gameloft and published by Ubisoft for the Nintendo DS on Febuary 5, 2008. Taking place in the year 1190 AD--one year prior to Altaïr Ibn-La'Ahad's quest for redemption in Assassin's Creed--the game depicts Altaïr's quest to find and destroy the Chalice; a sacred item that is rumored to have the ability to unite all of the factions of whichever side of the Third Crusade possesses it. Unlike in the original game, Assassin's Creed: Altaïr's Chronicles is told through the direct perspective of Altaïr rather than through Desmond Miles using the Animus. (Neither Desmond or the Animus make an appearance, though the styling of the game's menus do suggest that the game takes place in the Animus.)

Beginning with Altaïr’s return to Alep from a long journey, the city is soon under attack by the Knights Templar; the primary enemy during the game. After repelling the attack, the player is tasked with finding the Chalice, a sacred item that is said to have the ability to unite all opposing factions under one flag thereby ending the Crusade. Told by Al Mualim that such power is too dangerous to be in the hands of men, Altaïr is ordered to destroy it.

Throughout the game Altaïr encounters the leader of the Templars assigned to finding the Chalice, Lord Basilisk. Altaïr receives aid from local Keepers of the Assassins Bureaus such as Rafik, and other allies he meets along the way. Assassin's Creed veterans will visit familiar locations such as Acre, which is under siege by the Templars, Jerusalem, and Damascus, as well as new locations Alep, Tyre, and the Temple of Sand.

When starting a new game you can select either "Easy" or "Medium" difficulty, with "Hard" unlocks after finishing the game once. Many of the gameplay elements closely resemble those of the original Assassin’s Creed, albeit in a simplified or modified form. This game is more heavily involved with platforming, combat, and puzzle-solving than in stealth for the majority of the game.

Combat is reminiscent of the first Assassin’s Creed game. Typically, if you are surrounded, one guard will square off with you while the others surround you. Blocking is done with the "R" button which can then be followed up by a counter-attack if timed appropriately as an enemy attacks. Breaking the enemy’s guard and dealing extra damage can be done by using powerful combo attacks that are learned as the player progresses through the game. For example, Y+Y+Y executes Quick Strikes; a fast and easy-to-use attack that ends in a spinning strike.

The life bar does not regenerate over time as it is not a measurement of synchronization. Attacking civilians has no effect on it (or on them, for that matter). To regenerate health you must collect red orbs which can be found by either killing enemies, in containers such as jars, or on the ground.

Stealth is present and is necessary during some parts of the game but is mostly optional. Using the "R" button while the sword is sheathed, Altaïr can sneak past or behind guards and use the "A" button to grab and assassinate them using the hidden blade. If guards are alerted to your presence, the life bar flashes red until all guards that see you are killed or you are able to lose them by running away. Traditional hiding spots such as piles of hay, benches, or rooftop gardens are not available.

Blending in with the crowd is possible very late in the game with disguises--which completely alter Altaïr’s appearance--and by using scholars.

Altaïr begins the game with the hidden blade and sword, and he acquires more weapons by progressing in the game. With the exception of the hidden bade, the touch screen is used to select a weapon that is used with the "Y"button.

Blue orbs are scattered throughout the game; sometimes in plain sight and sometimes in pots that can be broken with the "A" button. And still yet others can be acquired from defeating enemies. The upgrade menu (a blue orb) is in the upper-right corner of the touch screen accessed by tapping it.

The sword has three levels which cost 100 orbs for the first upgrade. Upgrading increases your base damage.

Health can also be upgraded with increasing cost increments per level. Doing this adds a bar to the life counter.

Altaïr has to pick-pocket several targets throughout his travels usually to obtain a key to proceed to a new area. This is accomplished by using the stylus in the DS version to navigate an item through an oblivious targets' bag while avoiding the sides and other items that are jostling around inside as well. Bumping anything causes a meter to drop, and draining a meter empty results in failure. However, the player can simply try again immediately with no repercussions.

In order to obtain information, rather than simply stalking a target and beating him up, Altaïr grabs the target which triggers a mini-game that uses pressure points to force co-operation. This game is timing-based with circles on the screen that must be tapped at a certain time. There is also some dragging involved as Altaïr pulls the subject’s arm.

There are also many puzzles spread throughout the game that require the use of items such as boxes, levers, buttons, and so forth. Most of the time the player is given heavy hints or an outright explanation by either Altaïr talking to himself or by the game.