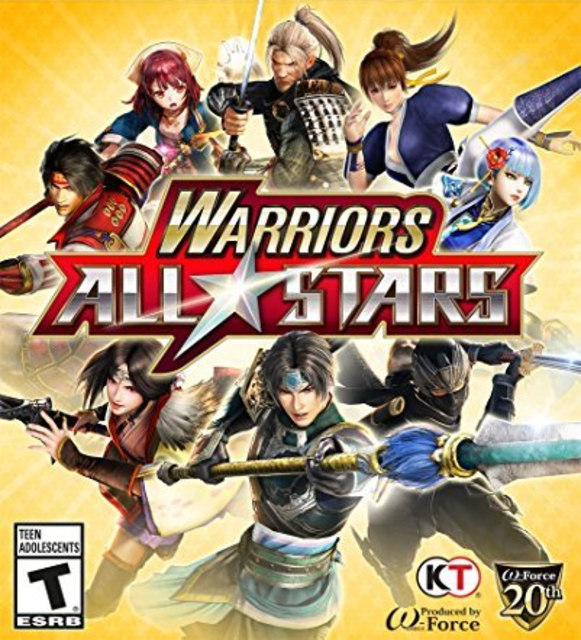 A crossover Warriors game from Omega Force and Koei Tecmo

Warriors All stars follows many of the traditional elements of warriors games with a handful of unique mechanics. Players embark in groups up to four characters. These other AI will attack on their own with the player being able to cast special attack or play with them in a linked formation ( characters form a line, then by pressing the attack button all characters in the line use their attacks). Players can also activate FEVER mode which swarms the player with one hit kill enemies, you are invulnerable, enemy officers have a spot light shine on them, and your supporting character yell out encouraging messages. Things glow and a lot of effects are popped off, akin to a jPop concert. Players normally have 30 seconds of this but by KO'ing units time can be added. At the end of time there is a large explosion doing extra damage and sever items converge on to your location, rewarding your performance.

The Game has a hub world which the player use to view and interact with other characters they are recruited or use the shop. Players can also accept sub missions here and level up. The more characters you have in your hub world the more interactions you have.

The Game does not have a set order for levels, players are given a large map which has spots the player can hover over to accept that mission. Players can just push straight through the story or use these extra missions to stock up on items or unlock new characters to your hub world.

Instead of weapons characters have Cards which are equipped. Cards have special abilities and traits. These cards can be leveled up by racking up KOs.

Each character has a relationship meter with all other characters, you can increase the relationship by playing with them and doing their tasks. You can only gain relationship points on the character you currently have as leader.

Atelier (Atelier Sophie: The Alchemist of the Mysterious Book):

Dead Or Alive (Dead or Alive 5 Last Round ):

Nights Of Azure (Nights of Azure):