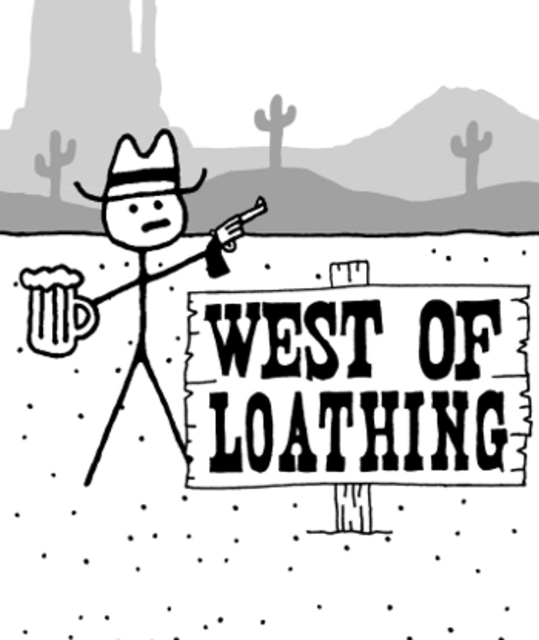 West of Loathing is a black & white, stick figure, slapstick Western from Asymmetric.

West of Loathing is a standalone, single player RPG/adventure game set in the universe of Kingdom of Loathing.

While West of Loathing retains the familiar monochromatic stick figure art of Kingdom of Loathing, it now features actual animation and direct character control. Combat is turn-based and takes place on a battle screen grid.

The game is set in the "Distant Lands," a continent to the west of the Kingdom of Loathing. This wild frontier is modeled after the 19th century American Southwest, with many trappings of the Weird Western genre, including occult and sci-fi elements.

The protagonist is a young adventurer who sets out to find their fortune and help the Manifest Destiny Railroad Company connect their rail line to the West coast city of Frisco. Along they way, they may run afoul of four major factions of villains: infernal cows from hell, a circus of sinister clowns, a necromantic cult, and robots from an ancient civilization that have been unearthed and run amok.

You may choose one pardner (companion) to accompany you on your journey:

Reckonin' at Gun Manor released in February 2019 adds a new area: the peculiar haunted mansion of Terri Gun, the inventor of the gun. You must discover the secrets of Ms. Gun and exorcise the thirteen ghosts of people who were killed by her invention.

How to Win Shadows Over Loathing