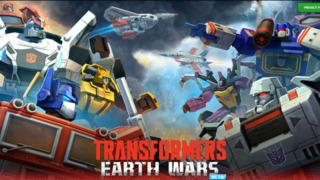 Transformers meets Clash of Clans. Classic G1 Transformers duke it for control of the Earth!

Transformers: Earth Wars is a Free to Play mobile game developed by Space Ape Games and published on iOS and Android by Backflip Studios. It is a real-time combat strategy game that mixes base building and squad based combat in the vein of Clash of Clans. Players compete with other players in asynchronous PvP earning "medals". Players can also join "Alliances" with up to forty other players. Both Player and Alliances "medals" are tracked on global leader boards.