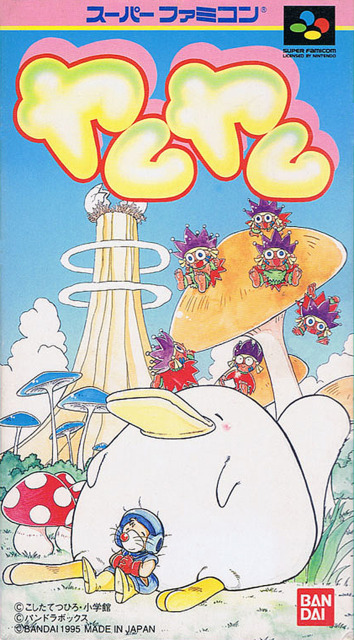 A shoot 'em up with RPG and adventure game elements in which a young boy and his giant bird friend move around the world completing quests for villagers.

Yam Yam, or Yum Yum, is a fantasy game from Pandora Box and Bandai exclusively for the Super Famicom. The player is a young boy called Magu Magu, who travels across the world with his friend: a giant light pink flightless (mostly) bird called Yam Yam. The duo move around talking to NPCs in various villages, picking up quests to complete.

When moving around between villages, the game switches to its core gameplay mode: a Z-axis shoot 'em up reminiscent of Space Harrier, where the player moves left and right as they scroll automatically forward. Enemies fly in from the horizon, as do various useful items, and the player has to survive the journey from one location to the next. They can use the experience they earn from defeating enemies to become stronger as well as increase their stock of cash to buy upgrades and power-ups. After every quest is complete, the game resets the player's levels and cash back to their defaults.