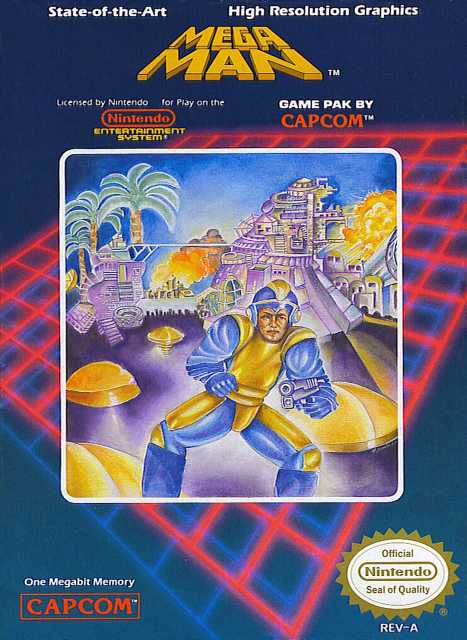 Featuring a robotic protagonist that could siphon the abilities of his adversaries, Mega Man is a side-scrolling platformer that begins the never-ending struggle between cheeky hero Mega Man and the evil roboticist Dr. Wily.

Mega Man (known in Japan as Rockman, and not to be confused with the PC and Game Gear games of the same name) is a side-scrolling action platformer developed and published by Capcom for the Nintendo Entertainment System on December 17 1987 (in Japan and North America) and May 1990 (in Europe).

It is the first game in the long-running franchise of the same name, establishing the basic criteria of robotic protagonist Mega Man venturing through a set of tricky levels (filled with never-ending robotic troops and deadly traps) in any order. Along the way, he absorbs a new weapon or ability from each of the bosses he defeats (all of which have a weakness to another boss's weapon), leading him to a final confrontation with the game's antagonist.

Set in the year 20XX, players control Mega Man, a humanoid robot created alongside seven others (each designed by genius Dr. Light for a specific industrial task, with the exception of housekeeping robot Roll). When Dr. Light's assistant, Dr. Wily, takes control of the robots with plans to take over the world (forgetting about Mega Man and Roll), it's up to Mega Man to venture through Monsteropolis, dispose of the rogue robots, and stop the plans of the evil roboticist.

Along with various ports and re-releases (including an enhanced remake for the PlayStation Portable), the game received numerous sequels, spin-off games (including a sports game , a racing game, and an arcade fighting game), and spin-off series (including the Game Boy games, Mega Man X, Mega Man Legends, Mega Man Zero, and Mega Man Battle Network). It also received its own American animated TV series and Japanese OVA years later.

Mega Man is a traditional side-scrolling action platforming game, starring the titular robot. His goal is to reach the end of each stage, traversing hazards and defeating enemies with his Mega Blaster (the default weapon, renamed Mega Buster in Mega Man 4). The end boss of each stage is called a Robot Master, of which there are six.

Each of Dr. Wily's six reprogrammed robots, or Robot Masters, must be fought at the end of their own individual stages before the player can enter Wily's fortress. The player can tackle the stages in any order, and once a Robot Master is defeated, Mega Man will acquire a new weapon. Every weapon has its own energy meter (except the default Mega Blaster), which can individually be filled or depleted based on usage. Each of the Robot Masters is especially weak against a certain weapon used by a different Robot Master, giving the player a reason to tackle the stages in a specific order.

Each of the weapons have their unique abilities. One weapon for example (Guts Man's weapon) gives Mega Man the ability to pick up large blocks and toss them at enemies.

"Designed to function as a lumberjack. Powerful saw-toothed scissors-like instrument protrudes from head, capable of gnawing through giant forest limber."

Cut Man's weakness is giant boulders that can be thrown by using Guts Man's power.

"A bulldozing character capable of lifting and transporting huge boulders."

"A real "blaster" as a heavy-duty laborer who use intensely powerful explosive to clear land for Dr. Light's construction projects."

"Melts and molds metals with flame-throwing torch flaring from atop his head."