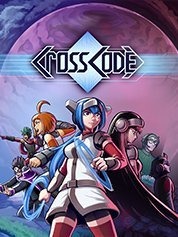 CrossCode is an action-RPG created in HTML5 by a German team named Radical Fish Games for Windows, Mac and Linux computers. Development of the game began sometime in 2011 and was initially released to the public in December 2012 as a tech-demo that only consisted of one area. Several other demos and builds of CrossCode were released in the following years but full-time development started in 2015 when the team launched an Indiegogo campaign on February 25th to help fund the project, which ultimately raised €90,026. The game soon became available as an Early Access title through Steam on May 15, 2015 and eventually left the service with version 1.0's release on September 20, 2018. Radical Fish Games is also planning to release ports of CrossCode for the PlayStation 4 and Nintendo Switch sometime in 2020.

In a distant future a whole planet has been turned into a giant playground for an augmented reality MMORPG called CrossWorld, where people can log into physical androids called "avatars" that are remote controlled by players on Earth. The main character "Lea" is one such player, who has seemingly lost her memory after playing and, following a brief explanation by some the MMOG's staff, is sent back into CrossWorld where her best chance of regaining her memory is by playing the game.

While being set in an MMORPG, CrossCode itself is an single-player action RPG reminiscent of SNES and Playstation 1 era JRPGs. Its most distinct quality, for a game of that genre, is its top-down shooter like control scheme, which makes both gamepad as well as mouse & keyboard viable options. Also noteworthy are the puzzle filled dungeons not unlike those of the Zelda games. Apart from the action oriented gameplay the game also comes with elements one comes to expect of an RPG such as a leveling system with skill tree, a story with multiple supporting characters and an open world.

The gameplay consists of combat, puzzles and some platforming. The player's main tools for those tasks are melee attacks, guarding, dashing and long range projectiles (named VRPs for Virtual Ricochet Projectiles, a.k.a. Balls).

Due to the heavy emphasis on throwing projectiles a comparison with top down shooters stands to reason. In most puzzles switches and other elements need to be hit from a distance, some of which require quick and precise inputs. By aiming for a short amount of time the player can shoot charged VRPs, which can ricochet of walls and reach places, which might be out of line of sight, hence their name.

Long range attacks also have their place in combat, where they can be used to keep a distance from enemies or to exploit weak spots, whenever such a chance arises. A fight against multiple enemies of different types can itself be seen as a puzzle, as each of them has their own attack pattern and needs to be taken out in their own way. The knowledge of how to deal with those situations becomes just as important as reaction, timing and execution. While most enemy types reward waiting and striking in the right moment, more seasoned players might try to get into close combat as much as possible, dealing considerably more damage but being at greater risk of taking hits themselves.

In defense the player can choose between the guard, to block imcoming attacks and reduce the damage taken, and dashing, to evade and keep a distance. However both of these can also are useful to maximise damage output. For example guarding can be used to "perfect guard", which requires the player to guard in the exact moment of impact in order to "guard counter", allowing to deal extra damage. Similiarly melee attacks and projectiles are used to end some enemies' attacks prematurely by hitting them as they are charging up. Overall all four main skills can be used in different ways and combinations, allowing for a variety of different fighting styles.

Adding to that the player can choose between four elements: heat, cold, shock and wave, which they have to collect over the course of the game, plus the neutral element. They add their respective elemental effects to the player's attacks, increasing the damage against enemies with certain elemental weaknesses, but likewise decreasing it in case of a high elemental resistance. In puzzles they are also mandatory, for example to melt down ice barriers in heat mode.

Each element has its own skill tree, called "Circuit". There the player can spend their Circuit Points earned at level ups for stat boosts etc., but also for special attacks, called "Combat Arts" in the game. Every Combat Art corresponds to one of the four main skills, so they are basically strong versions of melee, projectile, dash and guard. They also come in three levels, which corresponds to how strong they are and how many Special Points they consume. All in all a Combat Art has a type, a level and an element assigned to it.

Equipment that is either found, bought or traded during the game also increases the stats and can give special properties like extra invincibility frames. Consumable items are used for HP recovery or temporary stat boosts.

In many parts of the game the player can also play with two party members from a list of befriended NPCs.