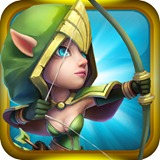 After the death of an old king, players must battle and build to rule the divided kingdom. The game features base-building and battle strategies. Players begin with a basic base which they're entrusted to build up and defend.

In growing their kingdom, players can design their base in any way they see fit. Defenses can be strengthened by upgrading buildings, training troops, hiring heroes, collecting resources, and researching base traits.

The game has several key battle features and game modes. Players must deploy troops and send out heroes to raid enemy bases or battle bosses. Each hero has a special Skill, and players assign Talents or Crests to strengthen the hero.

There are 4 types of heroes.

They range from most common and expendable (Sacrifice) to most rare and powerful (Legendary). They are used in both base defense and in offensive battles.