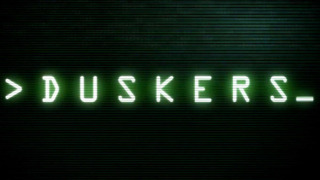 In this Sci-Fi roguelike, the player must scavenge derelict spaceships by remotely piloting drones with only some camera feeds and a command line.

Created by Misfits Attic, the indie game development studio who released A Virus Named Tom, Duskers is a sci-fi roguelike with elements of dungeon crawling and real-time strategy. The player must scavenge the resources to survive by remotely piloting drones into derelict spaceships and fending off (or avoiding) whatever dangers may lurk inside. All the while, searching for an explanation to how the universe became seemingly void of human life.

Duskers was released onto Early Access on August 20th, 2015 and is currently in an alpha state, with a hopeful release in "Fall 2015."

In Duskers, the player's goal is to survive. The player will navigate their salvage ship to other vessels in space, dock with them and send in drones to scavenge for fuel, scrap, and upgrades. It is much like FTL when it comes to the navigating star systems and managing fuel. When the player boards a ship, there are two viewing options: Drone view, and the map. There is only one manual control option in the game, and that is using the arrows keys to navigate the environment in the drone view.

Everything else is controlled using a command line. The commands are simple, but the player can chain together commands using ";" and can create aliases to issue specific, more complex, command strings with a single command.

When traveling between vessels, the distance between them is very important. The farther away a vessel is, the more propulsion fuel the player must use to get there. When the player runs out of propulsion fuel (or decides to leave a system) jumps cells are used to travel to nearby solar systems. The player's ship has a certain jump distance which can be increased with the "long-range scanner" ship upgrade. Certain systems may have a "stargate" in them, which can be used to travel to other galaxies.

Drones and the map schematic view

The player may have seven drones total, but only four can be deployed onto a vessel at a time. Each drone has a maximum health value, and three upgrade slots. Each drone's max health can be upgraded, and the drone's speed may be permanently boosted by 35% for 5 scrap. The drones are randomly named (from a list of names), have a chance to have different colored camera views, and may have different hull shapes.

Here is the map schematic view, where the layout and information on the ship currently boarded is displayed.

Blue squares are the player's currently active drones, also showing which direction they are facing.

Yellow square is a disabled drone.

Green capsule is a fuel depot.

The player spends propulsion fuel to travel between vessels in a system, and jump cells to travel between systems in a galaxy. Fuel is gathered on ships with fuel depots by drones with the "gathering" upgrade. When gathering, there is always a random chance on how much propulsion fuel and jump cells are gathered (sometimes even nothing can be gathered).

The player's ship has 6 units of propulsion fuel. After a jump to another system, the base 6 propulsion is replenished, and any propulsion fuel gathered is put into "reserves" which can be saved between systems to give the player more options later on.

Scrap is used to repair drones and upgrades, purchase items from trading posts, and upgrade the drones specifically. Scrap is also gathered by drones with the "gathering" upgrade, but can also be gotten by scrapping upgrades and drone (preferably spares). Scrap is revealed on a vessel by moving drones near them, doing a "shipscan" by a drone with the "interface" upgrade at a powered interface panel, if the player's ship has the "ship surveyor" upgrade, and by scanning a room with a drone that has the "scanner" upgrade.

Disabled or broken drones have a chance of appearing on vessels upon docking with them. If they are disabled, the player can have a drone with the "tow" upgrade tow the disabled drone back to their ship's docking bay so it can be repaired and used in later missions. A drone cannot be towed if it is broken, but the player may use the "swap" command to check what upgrades may be scavenged.

Ship upgrades that are found on vessels can be scavenged in the same way drones are. They must be in working order, and towed by a drone to the player's docking bay.

The drones the player controls are susceptable to item malfunctions. During a mission, a drone's upgrades can develope "errors" which is a warning that the upgrade may break soon. If an upgrade breaks, it is no longer usable, cannot be repaired, and is likely to cause serious heartbreak. If the player is able to leave the ship before the upgrade(s) break, scrap can be spent to repair them. A drone's camera feed might also malfunction, which leaves the view of that drone unusable.

During a mission, the vessel may be flooded by radiation,hit by asteroids, and doors may cease functioning. Radiation flooding can occur two ways: leaving an airlock open for too long, and radiation leaking through the hull. The latter's chance of occurring is largely determined by the hull integrity and age of the vessel, which are both given before boarding, and can be displayed with the command "status". Asteroid impact is completely random, and when it occurs the player is given a time until impact, and a percentage chance for specific rooms to be hit.

Ships come in many different flavors, which determines the likelihood of specific items and upgrades appearing.

Along with ship types they also come in grades (A, B, C, D) which determines the size of the vessel. D being small and A being quite large.

Advanced Vessels (which require a transporter to enter)

Opens or closes one or more specified airlocks, so long as they are powered.

'close all' Close all powered doors

Opens or closes one or more specified doors, so long as they are powered.

Ends mission, returns all drones currently in the docking to the home ship.

Warning: Any drones outside of the docking bay will be left behind.

If just 'help' or 'help all' is entered, opens the salvage operations manual.

If help is entered with a specific command name, detaile dhelp for that command will be displayed. ex. 'help generator'

lists inromations about items in the drone's current room

'open all' open all powered doors

retrieve status of the current vessel

swap upgrades with another drone

'swap' to display swap interface when near a drone. Arrow keys and enter to swap upgrades. ESC to close.

re-docks the player's boarding vessel at a a specified airlock

Picks up a placed trap, mine, or stun that hasn't been triggered

Brings up a dialog to confirm personnel transfer to currently boarded ship. This will make the current derelict ship the player's new home, leaving behind the old ship and acquiring whatever upgrades and extra (or fewer) upgrade slots aboard the derelict. Requires boarded vessel to be fully explored and free of all enemies. If there is any uncontained radiation, the ship cannot be commandeered.

self destructs the drone with an option delay

will damage everything in the current room.

'destruct' is equal to 'destruct t3'