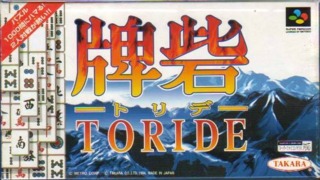 An arcade variation of mahjong solitaire where players have a seven-tile hand used to store and match tiles from the board.

Toride (loosely translated to "Fortress", also known as Pái Zhài, and sometimes known in the Arcade version as Last Fortress) is a mahjong solitaire game developed and released by Metro for arcades in Japan on March 1993.

Similar to traditional mahjong solitaire, Toride has players clearing mahjong tiles from a multi-layer tile formation by matching pairs. However, players now place tiles from the board into their seven-tile hand (or "box") used to store and match tiles.

The game later received a port to the Super Famicom on December 9, 1994, released by TAKARA. It also received multiple sequels, including Toride II, Daitoride, and Gekitoride.

The objective of the game is to empty the player's seven-tile hand, or "box". Players can put any valid tile (with no tile stacked on it and no tile to both its left and right) from the board into their hand, automatically removing pairs of identical tiles. Players start with three tiles from their hand, and win the match once they clear their hand. However, players receive an instant game over if they have seven non-matching tiles in their hand.

The game has a countdown timer similar to other arcade mahjong solitaire games, which get slightly refilled by matching pairs. There are several power-up tiles that do not need to be matched (instead just put into the hand), such as one that extends the timer.

Players are given additional combo points for consecutively creating matches.