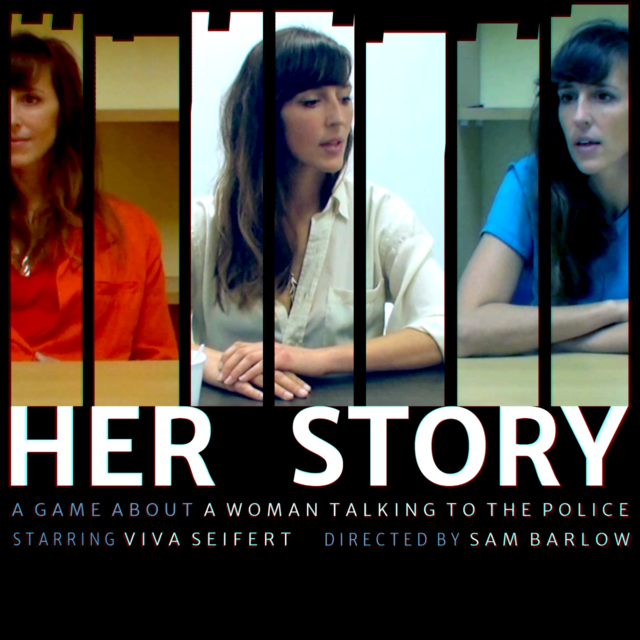 Players must search a fictional police database and watch live-action interviews of a woman whose husband went missing. The game is from Sam Barlow, the director of Silent Hill: Shattered Memories and Aisle.

The player is looking at a mid-late 90s police computer from the United Kingdom, presumably England, with a desktop, multiple text files, a video database, and a police video search engine built around small clips from 7 days of interviews of a woman in 1994.

Interaction is entirely point and click, with the player spending most of the time searching through video clips, tagging them, and logging them for viewing later as they try to understand what happened in the story. The police stenographed the videos, meaning all text is logged and searchable. So, putting in a word or phrase will find a video where the woman says that word or phrase. Up to five videos can be accessed at once, with a total for each query noted at the bottom. Searching nothing will pull up five videos, and show that there are 273 total. The player can check how many video clips they have seen – but not the exact details – by accessing a database program found underneath the video program. Green indicates watched videos, red for unwatched, and yellow is used for the last video clip that was seen.

The desktop also contains a hidden mirror tile game for two players and a clock.

The player is Sarah, a young woman given access to this database by a character known as S.B.. S.B. is looking to help Sarah understand why her mother "did what she did." When she has found a majority of the revealing videos – indicated by a brief flash of the protagonist's face reflecting off the computer monitor – S.B. contacts her and confirms her understanding. The game ends when the player tells S.B. that they understand (or that they do not).

The plot is actively ambiguous at points and multiple interpretations exist. Sarah's mother, a woman who calls herself Eve, claims she is the secret twin of a woman named Hannah (both women are played by Viva Seifert). When Hannah was born, her twin sister was faked dead by the midwife, who took her and raised her as her own across the street from Hannah's house. Eve grew up locked in the house, unable to leave, learning to read with fairy tale books. She saw herself as a trapped princess and Florence as a witch, especially when she discovered Florence's journal about taking her from her birth mother. She also became fascinated with what she thought was her reflection across the street, but was actually her twin sister Hannah.

The twins, according to Eve, meet when they are five. At eight, after discovering Florence's diary, Eve finds that Florence has fallen down the stairs and died. Whether she killed Florence or not, Eve leaves the house, walks across the street, and begins living in Hannah's attic. The sisters then begin a system of codes and rules to pretend to be a single person for the advantage of both. As they age, it becomes clear that Hannah is more introverted and cautious while Eve is more outgoing and reckless. They switch to cheat on tests or hit on and date boys. Their parents are none the wiser.

At 17, they begin dating a boy named Simon. Eve says that Hannah has sex with him first, and she becomes pregnant. Their and Simon's parents demand a fast wedding with the baby coming and they move into Simon's parent's house. Eve is left alone in Hannah's house. She has sex with lots of men to try to get pregnant, too, but she doesn't, seeing it as reflecting Hannah's periods. At 8 and 1/2 months, Hannah miscarries. Very soon after, Eve finds their parents dead from poisoned mushrooms, deaths that the police call food poisoning. Simon and Hannah move back into the parents' home, with Eve living in the attic.

Eve lives with them for a little while, but Hannah won't share Simon, and Eve feels like she doesn't exist. She leaves, getting a tattoo and her own apartment. She begins working in bars and becomes a singer, wearing a blonde wig to look less like her sister. Meanwhile, Simon and Hannah's relationship goes on, without any children or much excitement.

About 8 years later, Simon learns about Hannah's twin. He finds her playing in a bar and asks her out, both pretending she isn't Hannah's twin. They kiss on a beach sweetly, he finds her more engaging than Hannah, and they have sex. Again not using a condom as Eve thinks she's infertile, they find that Eve is pregnant. Eve tells Hannah she is pregnant. Hannah does not assume Simon was a boyfriend, but she is jealous of Eve. Eve talks to Simon and reveals she has a twin sister who she would like to have move in. When Simon hears she has a twin who is pregnant, the look he gives reveals that he is cheating on Hannah, and Hannah and him fight, but still go to sleep that night.

On her birthday, Simon gives Hannah a handmade engraved mirror in the morning. Hannah and Eve talk before Simon gets home and fight. Eve leaves and drives all the way to Glasgow. Hannah, to trick Simon, dresses in Eve's blonde wig in the evening. When Simon sees Eve, he gives her a duplicate mirror. She is furious at the deception and the fact that he is showing Eve the same amount of affection. They fight. He hits her. She breaks the mirror, she slashes at him, and she accidentally cuts his throat open, killing him.

Eve returns from Glasgow to find her sister sitting behind her murdered husband. She says they decide to hide the body, use Glasgow as an alibi, and keep their lives intact so that Eve's baby, Sarah, can have a chance at a good life. They hide the body in the basement and plan a narrative of discovering it for the police, throwing suspicion on themselves which they can later disprove with their alibi.

During the interview, one interpretation is that Hannah and Eve first hope to stay innocent through the Glasgow alibi, realize the cops have found out they are twins, Hannah runs, Eve tries to cover, and Eve is arrested.

It is also possible that Eve/Hannah are the same person with an incredibly complex disorder, or that Hannah and Eve both escape jail time due to lack of evidence connecting them to the crime, or that both are arrested and Sarah is raised in foster care.

In any case, in the end, Sarah and S.B. meet for coffee to discuss all that she has learned.

After the credits roll, S.B. gives Sarah access to 15 videos in the search results with the code admin_unlock entered in the search. admin_random will pull up a random video as well, with an approximate 50/50 chance of finding a movie file the player hasn't seen yet. The player is never locked out of the desktop, even after viewing every video. No further dialogue between S.B. and Sarah exists.