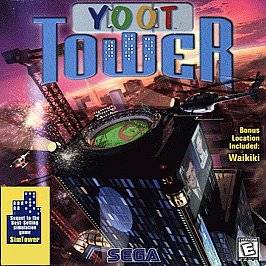 Yoot Tower is the follow up, but not direct sequel, to SimTower and was developed by creator Yoot Saito. In December 2010, it was released for the iPad.

Yoot Saito was one of the designers on the Maxis title SimTower. Years after that title's release Yoot decided to create his own follow up to the game called Yoot Tower. Yoot Tower is very similar to it's predecessor but does make some key changes. Different locations makes the tower's construction and design more puzzle like and more room types were added.

After choosing a starting area from Hawaii, Kegon Falls, and Tokyo you begin building your tower. Each location will affect the type of business your tower does, including the starting palette of rooms you can build from, and your beginning money amount.

Offices - Offices are rented out and where people work. Occupants won't be around on weekends and require restrooms on nearby floors. They do generate some income for restaurants and shops. Offices are generally low maintenance compared to other rooms but require a quiet working environment.

Residents - Apartment and condos are rented out to occupants based on leases. Apartments take in less money but also take up less room in your tower. Condos take up more room but also take in more income.

Hotel - Unlocked at a higher level you can add a lobby, single bed rooms, double bed rooms, and suites for hotel guests. Unlock offices or residents these are temporary occupants who might expect more to do in your tower. They also require housekeeping to visit daily.

Facilities - Unlike other rooms building facilities benefit the overall building and don't require occupants. This include restrooms for offices and restaurants, security for the building, power, trash, parking, and a doctor's office. Not every room needs to be build for a good tower and it all depends on how you've occupied your building.

Restaurants - There are a variety of restaurants that can be placed in your building. Some restaurants might do better in an office building, like a coffee shop, while others do better in a hotel, like a fancy restaurant. Restaurants tend to do poorly for awhile before business picks up. They also make a lot of noise and eventually need a built in trash facility.

Stores - Sometimes a businessman needs a a pack of cigarettes or a nice glass of juice. Stores are similar to restaurants and do better depending on the tower clientele. Your building can eventually be more like a mall, with electronic stores and arcades, later in the game.

City - Your tower need not stand alone. You can attach your building to city around you by building a subway platform that leads directly up into your lobby. You can also build movie theaters, event centers, or even a school. Some of these will depend on who is living/using your building to be successful while others will draw people from outside your tower and increase your security risk and noise level.