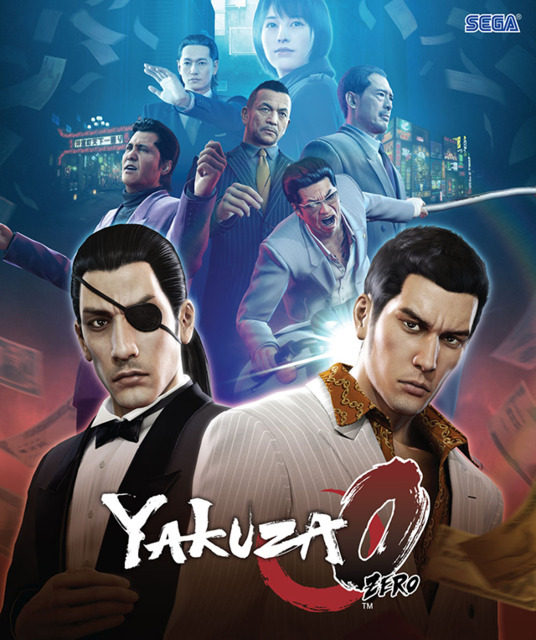 Yakuza 0 (released in Japan as Ryu ga Gotoku Zero: Chikai no Basho) is an action-adventure game developed by Ryu ga Gotoku Studio and published by Sega. It was released in Japan on March 12, 2015 and worldwide on January 24, 2017. The game is a prequel to the Yakuza series; its story is set in both Tokyo and Osaka in 1988, seven years before the events of the original Yakuza, and stars a young Kazuma Kiryu working as a low-level enforcer for the Dojima yakuza family. The game also focuses on Goro Majima, an ex-yakuza turned nightclub manager, as the second playable protagonist.

Yakuza 0 was a critical and commercial success for Sega. As of June 2015, the game has sold over five hundred thousand copies within Japan and Chinese-speaking regions of Asia. The franchise's overarching story is continued in Yakuza 6, which was released in Japan in late 2016.

Yakuza 0's free-roaming third-person gameplay takes place across two distinct urban areas: Kamurocho, a fictionalized recreation of real-world Tokyo's Kabukichō entertainment district, as well as Sotenbori, which is based on Osaka's tourism-focused Dōtonbori district. These areas are primarily traversed on-foot; the game does not feature useable vehicles, but taxis can be hailed for fast travel. Players must complete mandatory story missions in order to advance the main plot, and they may choose to interact with optional side quests and other activities for additional perks or story content.

Combat is melee focused; both Kiryu and Majima each have a unique set of three fighting stances which are unlocked by progressing through the story. Switching between these stances allows players to adapt to different combat situations and fighting styles. In addition to unarmed attacks, players can also wield a variety of weapons; these include objects found in the environment such as bicycles, furniture and street signs, as well as equippable items like swords and firearms.

Throughout the game, both protagonists engage in brawls against enemies to earn money in the form of yen, which can be spent on a wide variety of goods and services. Cash is also used to upgrade character attributes and learn new fighting techniques, which are unlocked through a skill tree. At a certain point in the game, the protagonists gain ownership over side businesses to provide extra cash flow; Kiryu runs a fledgling real estate agency in Kamurocho, while Majima becomes the manager of a struggling hostess club in Sotenbori. Completing all of the tasks associated with a particular character's side business unlocks a powerful new fourth fighting stance for that character ("Dragon of Dojima" for Kiryu and "Mad Dog of Shimano" for Majima).

Players may occasionally need defend their fortune; a special enemy type named "Mr. Shakedown" can be encountered, who is much stronger than standard enemies. If the player is defeated by Mr. Shakedown, their current character forfeits all of their cash, but players can attempt to fight the same enemy again in order to recover their lost funds, along with any additional cash that Mr. Shakedown happens to be carrying. Mr. Shakedown can sometimes be found sleeping in the streets, giving stealthy players the opportunity to steal cash straight from his deep pockets without a fight.

Alongside several minigames returning from prior Yakuza titles such as karaoke, Yakuza 0 introduces a handful of new period-appropriate side activities, including disco dancing and RC car racing. It also adds playable versions of several 1980s Sega arcade classics, including Hang-On, Space Harrier, OutRun and Fantasy Zone.

In December 1988, twenty-year-old Kazuma Kiryu is caught in the middle of a deadly power struggle stretching across Japan's entire criminal underworld. Kiryu works in Tokyo's Kamurocho district as low-level muscle for the Dojima Family, a subsidiary of the powerful Tojo yakuza clan. After shaking down a businessman for a ‎¥300,000 debt on behalf of a loan shark, Kiryu is framed for murder when the civilian he collected from turns up dead inside a hotly contested piece of undeveloped real estate known as the "Empty Lot".

The identity of the murder victim is made public the following day, and Kiryu is immediately summoned to meet with his superiors, the three lieutenants of the Dojima Family. After pleading his innocence, Kiryu learns that the family's patriarch Sohei Dojima has offered the position of family captain (his second-in-command) to whomever can deliver the Empty Lot's deed into his hands. The Lot itself is the linchpin to controlling a large contiguous portion of Kamurocho's total real estate, making the tiny patch of land extremely valuable. However, the Lot's owner has gone missing, stalling Dojima's "Kamurocho Revitalization Project" to bundle and sell the surrounding properties for an enormous profit. The police's murder investigation in the Empty Lot has also drawn unwanted attention, further complicating matters.

Dojima's current captain Shintaro Kazama is serving a six-month prison sentence as the result of an unrelated police raid on one of Dojima's illegal gambling operations. Kazama is implied to have information on the whereabouts of the Empty Lot's missing owner when Daisaku Kuze, Dojima's most senior lieutenant, approaches Kiryu privately and offers to shield him from the authorities in exchange for spying on Kazama. As an orphan raised by the honorable captain Kazama, Kiryu declines the offer, realizing he is being coerced by the ambitious Kuze due to Kiryu's strong ties with Kazama as a father figure. Kiryu also learns that Kazama faces expulsion from the Dojima Family because of Kiryu's involvement in the Empty Lot incident, as the captain was Kiryu's original sponsor when he joined the yakuza. Desperate to protect Kazama from reprisal and prove his own innocence, Kiryu seeks to leave the Dojima family by any means necessary in order to investigate the Empty Lot murder on his own.

Meanwhile, in Osaka's Sotenbori district, Goro Majima has built his reputation as "Lord of the Night" over the last six months as manager of the Grand, Sotenbori's top cabaret. However, the Grand is merely a front for the Omi Alliance, a yakuza coalition based in western Japan whose power rivals that of the Tojo Clan. Following a two-year period of brutal torture and his subsequent banishment from the Shimano Family for disobeying orders, Majima is now a civilian being forced to funnel the Cabaret Grand's profits into the yakuza's coffers with nothing to show for it himself. He is kept on a tight leash by his yakuza handler and the Grand's true owner, Tsukasa Sagawa, who strings along Majima with promises that he will eventually be allowed to rejoin the Shimano Family after sufficiently demonstrating his loyalty.

One day Sagawa finally offers Majima the chance to return to the yakuza's good graces by performing an assassination. Despite eagerly accepting the mission and tracking down his quarry, Majima finds himself unable to carry out the hit after discovering his target is a defenseless blind woman. Majima instead resolves to protect this enigmatic woman while also uncovering the truth behind why she has been marked for death by Sagawa's organization.